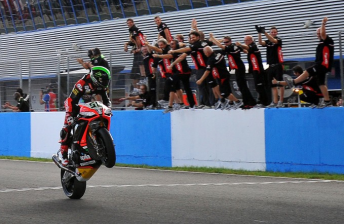 Aprilia has enjoyed recent success in the WSBK

Aprilia will return to the MotoGP world championship with a factory entry in 2016, the Italian manufacturer has announced.

The Piaggo Group brand has been absent from the premiere class since 2004, instead concentrating on the World Superbike Championship.

“In 2016, Aprilia will return to MotoGP with the goal of winning and discovering the same success we have enjoyed in World Superbikes,” he said.

The timing of the planned return is guaranteed to raise eyebrows with the current rule package confirmed until 2017.

How it will operate its factory program remains to be seen, with likely candidate Aspar announcing earlier this month that it will move up to the top class with Honda production machinery in 2014.

Aprilia’s return could see five manufacturers on the 2016 grid, with Suzuki already planning to join Honda, Yamaha and Ducati in 2015.