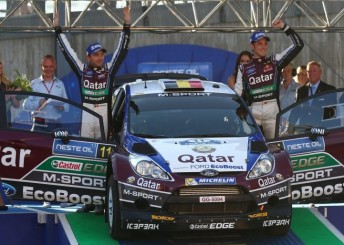 Hyundai has confirmed Belgium star Thierry Neuville will lead the manufacturer back into its second tilt at the World Rally Championship in 2014.

Neuville has played a starring role for the M-Sport Ford operation this season and is running second on the points table behind Volkswagen’s already crowned world champion Sebastien Ogier.

Hyundai has signed the 25-year-old Neuville and his co-driver Nicolas Gilsoul in a multi-year deal however it has not yet announced plans for its second driver with Australia’s Chris Atkinson still in the running for the final seat.

Atkinson along with Juho Hanninen and Bryan Bouffier have been the official test drivers for Hyundai’s big budget i20 program and has been involved in heavy testing in Spain and Germany in the last month.

“By signing a driver of Thierry’s talent, we can show that Hyundai’s WRC engagement is serious and focussed on long-term success,” Hyundai Motorsport boss Michel Nandan said.

Neuville has been highly sought after this season after putting in some outstanding performances against the Volkswagen and Citroen operations.

Impressed with Hyundai’s huge facility in Germany, Neuville has been one of the big improvers in only his second WRC season.

“I believe Hyundai Motorsport is the perfect fit for me because it is a young, emerging and ambitious manufacturer team with long-term objectives for championship success and I have long held aspirations of driving for a manufacturer team,” Neuville said.

Neuville had been offered a three-year deal to stay on at the Cumbria-based M-Sport team and he also fielded offers to go to Citroen.

M-Sport managing director Malcolm Wilson voiced his disappointment at losing such a talent in Neuville.

“We are obviously disappointed that Thierry has made the decision to go to Hyundai after a strong performance from all the team this year,” Wilson said.

“ However, now that he has made the decision, our focus turns to Wales Rally GB (final WRC round from November 14-17) and securing his second position in the drivers’ championship.”

Hyundai has not given any indication of when it intends announcing the second driver.