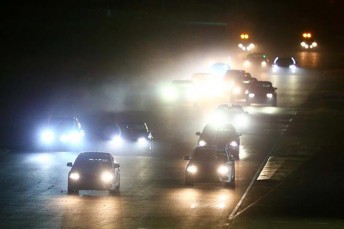 The Australian Manufacturers’ Championship at Queensland Raceway earlier this year

This week’s Pirtek Poll asks you to choose your favourite national class from the array of categories currently spread across the V8 Supercars support bill and Shannons Nationals events.

At the forefront of the V8 Supercars’ support action, the category’s second-tier Dunlop Series has emerged as a quality show in its own right over recent years.

Boosted by an improved television package for 2013, the series has consistently pulled near capacity fields while blooding the next generation of V8 Supercars stars.

Eight-cylinder action is also provided by the V8 Utes and the Touring Car Masters at selected V8 Supercars events, with the latter class having taken honours in a support category poll run by Speedcafe.com in January, 2011.

Those looking for a change of pace can turn to the variety and sophistication of Australian GT or novelty of the pint-sized Aussie Racing Cars.

The V8 and Porsche double act is repeated on the Shannons Nationals card, where a third-tier of V8 Supercars, the Kumho V8 Touring Car Series, is joined by Carrera Cup’s second tier, the GT3 Cup Challenge.

For many, the Formula 3 Australian Drivers’ Championship is Shannons’ headline act, while a second open-wheel category, Ford Ford, will join the bill next year in a revitalised national series.

Vote for your favourite national circuit racing class in the poll below.