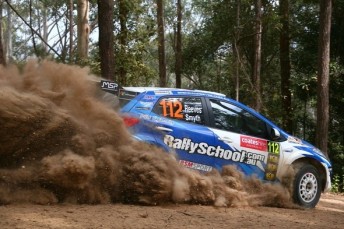 Reeves is back in the Mazda2 at Rally Victoria

Australian two-wheel-drive US Rally champion Brendan Reeves will have highly experienced Glenn Macneall in the co-driver’s seat for the final round of the Australian Rally Championship in Victoria later this month.

Reeves’ sister Rhianon is usually in the co-driver’s seat, but she recently married Alex Gelsomino, the navigator for US star Ken Block. She is not available due to the requirement as part of her citizenship to stay in the US for the next six months.

After sealing the Rally America 2WD Championship with five class wins aboard a Ford Fiesta, Reeves will be back aboard a Mazda2 for the 15-16 November around Warragul in West Gippsland.

Along with the twin Honda entries of Eli Evans and Mark Pedder, as well as Renault’s Scott Pedder and Tom Wilde, Reeves will be one to watch after he took the second leg and finished second outright in the ARC section of Coates Hire Rally Australia in Coffs Harbour.

“I’m rapt to have a co-driver from WRC level like Glenn with me for Rally Victoria,” Reeves said. “We are already good friends and we both can’t wait to get to the rally.”

Macneall was co-driver to Chris Atkinson in the Subaru World Rally Team, and co-driver Nathan Quinn in the WRC Mini at Rally Australia, plus last weekend he sat beside India’s Gaurav Gill at the final round of the Asia Pacific Rally Championship in China.

“I’m excited to sit beside Brendo as we have rallied against each other over a long period and now we get the chance to be a team,” said Macneall.