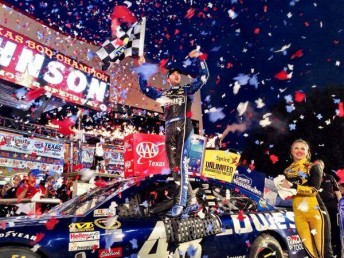 Jimmie Johnson pulled seven points clear of Matt Kenseth in the Chase for the Sprint Cup by taking a dominant victory in the AAA Texas 500.

The Hendrick Chevrolet was the class of the field at the high-speed Fort Worth venue, leading 255 of the 334 laps.

A slow penultimate pitstop that dropped Johnson from first to sixth was the only threat to the five-time champion’s dominance, but it would take less than 20 laps for the #48 to regain the ascendancy.

Dale Earnhardt Jr made it a Hendrick one-two in second, while the Penske Ford of Joey Logano and Joe Gibbs Toyota of Matt Kenseth were third and fourth respectively.

Kenseth had entered the weekend tied on points with Johnson, but found himself on the back foot after a mid-race drive-through penalty for speeding on pit road.

It was an even tougher afternoon for other key Chase contenders including last week’s winner Jeff Gordon.

The four-time champion fell from third to equal sixth in the standings after a tyre problem saw the #24 Chevrolet crash out of contention.

Fourth-placed points man Kyle Busch had earlier seen his title hopes slip away when a tyre issue of his own saw the #18 Toyota tag the concrete.

Seventh was enough to see Kevin Harvick move from fourth third in the standings, albeit a full 40 points adrift of Johnson with just two races remaining.

Australian Marcos Ambrose remains down in 21st after fighting a loose car on the way to a 21st place race finish.

See below for full Texas result

See below for full points standings