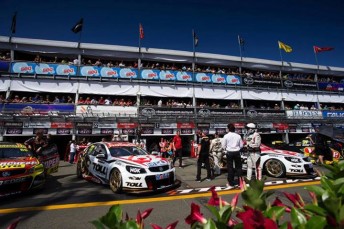 The structure of Walkinshaw Racing’s Adrian Burgess-led assault on the 2014 V8 Supercars Championship may not become clear until the new year.

Team owner Ryan Walkinshaw is openly discussing efforts to add a fourth car to his stable next season for the team’s soon to be out-of-contract rising star Nick Percat.

The Clayton, Melbourne, based team has run as a three-car outfit since selling its fourth license back to V8 Supercars at the end of the 2010 season.

Citing improved economies of scale and a desire not to lose Percat to a rival outfit as the main motivators for chasing a fourth entry, Walkinshaw has stressed that finding funds to expand will take time.

“The fourth car is something we’re looking at but it’s got to be right and we’ve got to go and find sponsorship,” said Walkinshaw.

“It’s all well and good that sponsorships are getting a little bit easier for us as a team (due to improved performances) and as a category, but there’s a significant amount of money we need to find out of nowhere.

“It’s going to be a hard slog, so don’t expect any sort of news soon. It’s something that’ll probably be announced towards the end of January, if we get it to happen.”

Sourcing a license under which the car could run is unlikely to prove a difficulty given the amount of potential for movement in the market.

Speculation has linked Charlie Schwerkolt’s currently Ford Performance Racing-serviced #18 license to Walkinshaw in recent weeks, while several others, such as James Rosenberg’s #47, Paul Morris’ #97 and Dean Fiore’s #12 are also yet to find confirmed homes.

“We wouldn’t be in the market to buy one, we’d be looking to do a deal,” continued Walkinshaw when asked of sourcing a Racing Entitlements Contract.

“There are four RECs floating around at the moment, so there are people we can talk to.

“Some of them have money, some of them don’t, but we’ll just have to see what happens.”

The one element of the potential entry that Walkinshaw is adamant on, however, is that it would be for Percat.

Describing the 25-year-old as “a future championship winning driver and a good personal friend”, Walkinshaw insists that the decision to draft Tim Slade into the seat vacated by Russell Ingall at the end of 2013 was not a slight on Percat’s standing within the team.

“Tim Slade is the preferred driver for Supercheap and they’ve had a relationship with him over a long period of time,” said Walkinshaw.

“We wanted to make sure the sponsor was happy with the driver we were putting in.

“Between Scott McLaughlin, Tim Slade and Nick Percat, they’re probably the three guys that we wanted to put in that car.

“We went with Tim because we thought he was the better fit for what car he was going into, but if we can get a fourth car it’ll be based around Nick Percat.”

Walkinshaw is also certain that Slade, and potentially Percat, would not run into any political road blocks should they out-perform Holden Racing Team drivers Garth Tander and James Courtney.

The squad’s previous time as a four-car outfit saw the then HSV Dealer Team branded cars win the championship in 2006 and 2007, leading to the team manager, star driver and associated race engineer being moved to the HRT for 2008.

“Hopefully things will be a little bit better managed than they were back then,” he said.

“What we want is four drivers constantly pushing each other because that’s the way you’re going to get the best out of everyone and each engineering team.

“We’ve got partners on all four cars and all of those partners expect to have victory and be able to get the results that they desire.

“We’ve got to fulfil those and, at the end of the day, a Walkinshaw car crossing the line at the end of each race is what we want to see.”