POLL: Will Reynolds be a title contender in 2014?

POLL: Will Reynolds be a title contender in 2014? 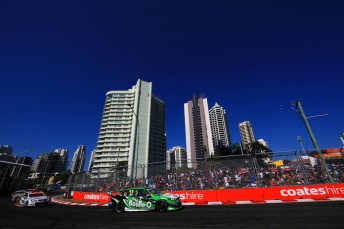 A maiden victory for David Reynolds on Sunday came as the Victorian reaches the end of his second season at Ford Performance Racing.

Reynolds did the hard yards to move into the V8 Supercars category by building a CV that included winning the 2004 Australian Formula Ford title and then capturing the 2007 Carrera Cup Championship.

He spent a single year in the Development Series in 2008, making his V8 Supercars Championship debut with Walkinshaw Racing in that year’s Phillip Island 500.

A full-time main series gig followed with the team in 2009, but he experienced a difficult season and was forced back into co-driver roles again the following year.

He linked with Kelly Racing in the Stratco-backed Commodore before controversially parting for FPR’s The Bottle-O Falcon.

Since then he has gone agonisingly close to winning on several occasions, most notably the gallant fight to second in last year’s Bathurst 1000.

Reynolds landed on pole position for the second 300km race at Surfers Paradise but was seemingly destined to be bridesmaid again before, 14 laps from the end, James Courtney’s steering gave up, giving him a passage to victory.

The 28-year-old hams it up off the track but he is an intense racer.

Has Reynolds got what it takes to become a Championship factor?

Lodge your vote below.