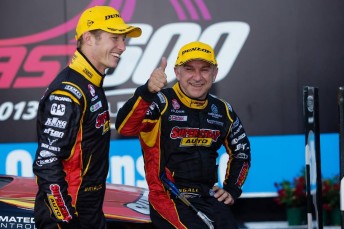 Russell Ingall is promising to keep an eye on the remainder of the V8 Supercars ‘silly season’ in the unlikely chance that he can pick up another full-time drive for 2014.

Ingall combined with Ryan Briscoe to take the first podium of what is being touted as his retirement season on Sunday.

The two-time Bathurst 1000 winner has endured a largely uncompetitive second year at Walkinshaw Racing; a seat he’ll lose to Tim Slade for the new season.

Ingall in fine spirits after Sunday’s race, which had ended with him holding out Red Bull’s four-time champion Jamie Whincup.

“It was good in a lot of respects because we’ve had a pretty tough year for various reasons, a lot of which will be explained in the book when I eventually write one,” he said of the result.

“It’s just good to race. You don’t need to win a good race to have a good race. It was competitive, the car was good and when you’ve got someone like Whincup behind you it’s not easy, because you know the bastard won’t give up.

“The biggest thing is for Ryan. We had a pretty average Bathurst and we were both pretty down in the mouth so it’s really good to send him back to the states with a surfboard and his chest out because he did a fantastic job and he’s a class driver.

“He deserves more accolades for what he’s achieved in the states over the years.”

When asked what he’ll be doing next season, Ingall appeared resigned to missing out on a full-time seat, although noted that the grid’s make-up is far from sorted.

“I’m just sitting on the fence a bit at the moment and seeing what kicks around,” he said.

“I think there’s going to be a fair bit of movement between now and the end of the year.

“At the very least I should hope that I’d get an endurance drive somewhere. I think that’s a given, but as far as anything permanent goes, who knows?

“I think the general climate out there in the teams is pretty volatile at the moment and I think there’s a lot of question marks over a lot of teams in terms of sponsorship. I think there’ll be a bit of amalgamation going on as well.

“Once all that settles there might be something that crops up, you never know, but if it doesn’t I’ll just cruise around, do the enduros and buy myself a gold chain and some white shoes and be a Gold Coast property developer.”