Relief for Reynolds after maiden win

Relief for Reynolds after maiden win 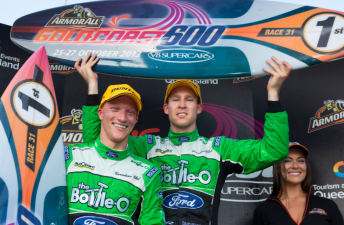 Reynolds with Canto on the podium

David Reynolds admitted to breathing a sigh of relief as he crossed the line to record a long-awaited maiden V8 Supercars race victory.

The 28-year-old took the lead with 16 laps remaining as his car’s race long adversary, the James Courtney/Greg Murphy Holden, pulled off the track with broken steering.

Reynolds subsequently controlled the gap back to second placed Fabian Coulthard in the closing laps to win by 1.2s.

Although stressing that he never doubted his ability to win in the top-flight, the former Australian Formula Ford and Australian Carrera Cup Champion had to wait 122 starts for his maiden victory.

The result came from his fourth career pole, from which co-driver Dean Canto led the opening stages.

“As soon as I crossed the line there was a sigh of relief that it was over and I’d won,” Reynolds told Speedcafe.com.

“My car wasn’t handling that good over the last 10 or 12 laps, so I was almost in damage control on the way home.

“As soon as Courtney had that mistake I realised I could probably do that too.

“I had been pushing hard to stay on his tail, but as soon as he pulled off the road I realised that I probably didn’t have to push as hard, so I pegged it back by half a second or so.”

One of the sport’s more complex characters, Reynolds added that he’d brought a revised attitude to the Gold Coast venue.

“This weekend I tried to work on my attitude a bit, because every time I go to Bathurst I’m just a different person,” he said, having two weeks ago had a strong Bathurst result curtailed by a late fuel strategy error.

“I love the whole Bathurst weekend and I’m trying to take that to every race now. Even Winton, even Symmons Plains, even Ipswich…”

Next year will mark Reynolds’ fifth full-time V8 Supercars season and his third with The Bottle-O FPR Falcon.

Announcing a new deal with the team in September, Reynolds says he’ll “absolutely” be a championship contender next year, although warns that there is still work to do before he can consistently match the very best.

“I still have some weak tracks I need to work on a bit, but everyone has strengths and weaknesses.” he said.

“This track I’d probably tagged as a weakness track and I’ve gone out and won it, so I can probably throw that theory out the gate!”

Reynolds sits 13th in the 2013 V8 Supercars Championship points standings after 31 of 36 races.