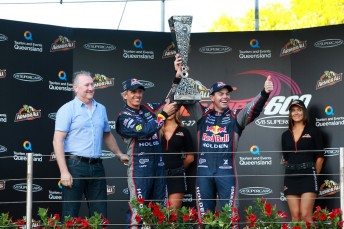 Lowndes and Luff drove a tidy race but were ultimately hampered by having to double stack in the pits behind team-mate and fellow Pirtek Cup contenders Jamie Whincup and Paul Dumbrell.

However, a strong final stint on the Surfers Paradise street circuit saw Lowndes bring the #888 Holden home in eighth, which was enough to take the Pirtek Cup by 78 points.

The result marked one of the biggest accolades of Luff’s career.

“Its fantastic to win the Pirtek Enduro Cup. It’s great that Pirtek have come up with this concept and its great to see them supporting the sport,” Luff said.

“Its fantastic to be able to share this victory with Craig (Lowndes) and to help him come out of this weekend with the championship lead.”

The new-for-2013-competition was contested over the Sandown 500, Bathurst 1000 and the Gold Coast 600 events to determine V8 Supercars’ best enduro pairing.

Whincup and Dumbrell finished fourth in Race 2 which was enough to salvage the runners-up spot from the Pepsi Max FPR Ford of Bathurst 1000 winners Mark Winterbottom and Steve Richards.

The final race of the Pirtek Enduro Cup was won by the Bottle-O Ford of David Reynolds.

He finished ahead of Brad Jones Racing’s Fabian Coulthard and Luke Youlden.

Red Bull Racing’s Craig Lowndes and Warren Luff moved into the lead of the Pirtek Cup standings for the first time after taking victory in Saturday’s 102 lap encounter.

The result came after finishing third at the Bathurst 1000 and second at Sandown 500.

Heading into the final race of the championship-within-a-championship, both Red Bull Holdens of Lowndes/Luff, Whincup/Dumbrell and both Pepsi Max FPR Fords of Winterbottom/Richards, Will Davison/Steve Owen were in contention to win the trophy.