Latvala edges to the lead in Spain

Latvala edges to the lead in Spain 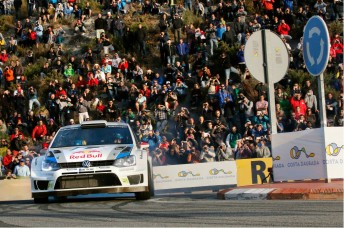 Latvala lead the field coming off the tarmac stages

Volkswagen’s Jari-Matti Latvala has the lead at the second leg of Rally de Espana; Dani Sordo could be in the box seat heading into the final day when the event switches from asphalt to gravel.

Sordo trailed Latvala by 0.1sec heading into the penultimate stage and his measured pace means that Latvala will be the road sweeper. However, dry conditions could mean that dust might come into play.

An extended 75 minute service at the end of the second day allowed teams to transfer their cars from asphalt to gravel specification.

“Going from asphalt to gravel after two days won’t be easy,” said Latvala.

“It’s a new challenge but I have a good feeling. I hope the weather will give me some support. A little bit of moisture to dampen the loose gravel would be nice….” he smiled.

Sordo was pleased with how the day turned out.

“I lost a bit of time at the end of the stage so I could be in a better position tomorrow,” said Sordo.

“All I can do is try my best. The tactics started yesterday and have gone OK. Can I win? I hope so, it’s a big challenge.”

Thierry Neuville is third, 29.3sec behind Latvala after a frustrating morning when he was unhappy with the balance of his Ford Fiesta RS. Changes in service revitalised the Belgian.

Earlier in the day Sebastien Ogier lost his overnight lead when he damaged a wheel after hitting a stone. He recovered to fourth, 46.5sec off the lead and cannot be ruled out. “I don’t know what’s possible. There’s 140km to go and I’m starting fourth on the road. We’ll push and see what we can do,” promised the Frenchman.

“With every stage we complete, the more comfortable we continue to get,” said Paddon.

“We’re continually learning about the set-up of the car that works best,” Paddon said from rally HQ in the Spanish tourist city of Salou.