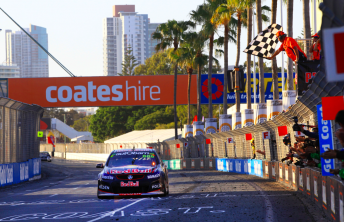 Craig Lowndes has taken the V8 Supercars Championship lead after combining with Warren Luff to win Race 30 at Surfers Paradise.

The result came despite an early puncture for Luff that forced the #888 Red Bull Holden into an unscheduled pitstop.

Early Safety Cars contributed to a complex strategic battle that did not shake out until Lowndes took the lead for good with less than 20 laps remaining.

Shane van Gisbergen and Jeroen Bleekemolen finished second. The Kiwi had led Lowndes ahead of their final stops, but lost track position with a longer fuel fill required.

Mark Winterbottom and Steven Richards completed the podium, with the former holding off a charging Tony D’Alberto in the closing laps.

Russell Ingall continued his strong street circuit form this season by finishing fifth alongside Ryan Briscoe after steering clear of trouble during a frantic race.

Race 30 was a disaster for erstwhile points leader Jamie Whincup, who watched on as co-driver Paul Dumbrell tangled with Greg Murphy in the early stages.

The contact put Murphy into the wall at the beachside chicane and immediately out of the race, while Dumbrell pulled his crumpled car over a short time later with a driveline failure.

Fabian Coulthard was another hard luck story having appeared set for a podium finish until a heavy kerb strike broke the right-front corner of the Brad Jones Racing Holden with less than 20 laps remaining.

All four Nissans ran strongly at the mid-point of the race, but an 11th for Rick Kelly/Karl Reindler would prove the team’s best result.

Michael Caruso’s Altima retired just after halfway following front-end damage caused by the circuit’s aggressive kerbs, while James Moffat pulled off with less than five to go with an engine failure while running ninth.

Tander and Percat had one of the fastest cars for the majority of the race, but lost two laps after the car stalled at its penultimate pitstop and failed to restart.

A second 300km leg will complete the Armor All Gold Coast 600 on Sunday.

See below for the full Race 30 result