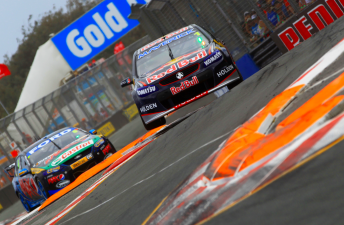 The #1 Holden heads through the beachside chicane

The #1 Red Bull Holden of Jamie Whincup and Paul Dumbrell topped all four Friday practice sessions at the Armor All Gold Coast 600.

Whincup completed the sweep by edging out the Holden Racing Team’s James Courtney in Practice 4.

The Holden duo swapped the top spot between them throughout the 40 minutes, with Whincup eventually setting the best time of 1:10.28s on his final lap.

Courtney improved on his final flyer but fell 0.17s short, while David Wall was a surprise third in the Wilson Security-backed Brad Jones Racing entry.

Both drivers lost time late in the session following heavy kerb strikes, with the former damaging two tyres and the latter damaging his car’s suspension.

Jason Bright missed the session while his team repair the BOC Holden crashed heavily by co-driver Andrew Jones earlier in the afternoon.

The V8 Supercars will return to the circuit for Race 30 qualifying at 1030 local time on Saturday.