Whincup on top in Practice 1 at Surfers

Whincup on top in Practice 1 at Surfers 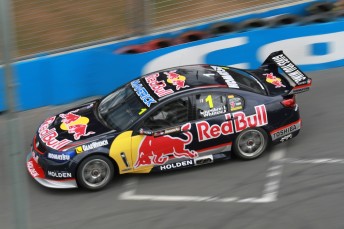 Jamie Whincup continued his affinity with the streets of Surfers Paradise by setting the benchmark in Practice 1 for the Armor All Gold Coast 600.

Whincup reeled off a 1:11.67s time on his third run of the session to eventually top the 40 minute hit-out.

Fujitsu GRM star Scott McLaughlin was third fastest in 1:11.97s, the only other driver to dip under the 1:12s mark.

Whincup responded to the early pace shown by Davison who was the first driver to dip into the 1:12s region before he charged to his best lap of the session.

Proceedings were halted briefly for debris after several cars grazed the walls and wiped out their wing mirrors.

The only co-driver to cut any laps was David Brabham, who together with Tim Slade in the #47 HHA Mercedes, were 11th fastest.

Michael Caruso made it three Nissans in the top 10, although there was no such joy for the fourth Nissan Motorsport Altima of James Moffat who had mechanical problems and only turned one flying lap to be left down in 28th.