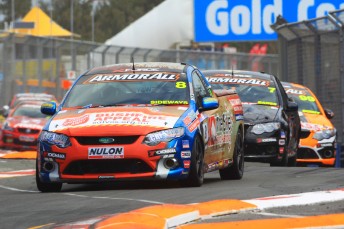 Sieders, who heads into this weekend’s meeting with a three point lead in the title race, pipped Rhys McNally to the pole by a tenth in a close session that saw the top 12 covered by less than a second.

George Miedecke, Kris Walton and McNally all enjoyed spells holding provisional pole but it was Sieders‘ effort of 1:25.2399s that earned him the all important pole.

The session was briefly halted when a spin from Matthew Nolan brought out the red flags at the halfway mark.

In the end, nobody could deny Sieders pole and he will be joined on the front row by McNally. Nathan Pretty was third fastest less than a tenth quicker than Walton in fourth.

Title contender Ryal Harris will start from seventh on the grid.

Meanwhile, Minda Motorsport’s Liam Sager kicked off the racing action at the Gold Coast 600 with an impressive drive to victory in the Australian Formula Ford Championship opener.

Sager’s day didn’t begin with the best of starts after a collision involving his team mate Macauley Jones ended their qualifying session prematurely.

Luckily, Sager saved his best form for the race as he stormed from third on the grid to take victory in race one.

Sam Power, who grabbed pole in qualifying, led the field into turn one closely followed by championship leader Anton De Pasquale, with Sager in hot pursuit.

By lap two, Power and De Pasquale were side by side on the pit straight with the poleman forced to hand the lead over.

The move allowed Sager to apply pressure on Power and he soon found a way through.

Meanwhile title contender Jones, who started from a lowly 11th due to his qualifying accident, had climbed up to seventh position.

A mistake from De Pasquale at the chicane gifted Sager a run on the leader and he made the move count. Power also capitalised and moved into second spot.

Sager looked in control at the front and he went on to take the chequered flag by eight tenths of a second from Power and De Pasquale.

With Jones only managing to come home in sixth, De Pasquale has extended his lead in the championship.

In the Aussie Racing Cars, Young Racing’s Trent Young proved to the quickest of the 47 cars as he grabbed pole position for Saturday’s opening race.

The New South Welshman managed to find enough clear track to set a 1:24.8621s which was eight hundredths of a second quicker than Tyler Owen.

Third in the title hunt, Darren Chamberlin was only seventh quickest.