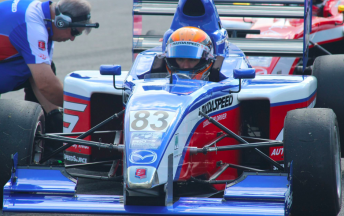 Matthew Brabham during his record-breaking Pro Mazda season this year

Third generation racer Matthew Brabham’s elevation to the Indy Lights Championship next year will be his litmus test according to uncle David Brabham who is in action in the Armor All Gold Coast 600 this weekend.

Young Brabham was recently confirmed for a seat with Andretti Autosports in the IndyCar feeder series after his record-breaking run with the same squad in the Pro Mazda Series this season.

The 19-year-old son of Geoff Brabham, who carved a hugely successful career in the US from the 1970’s to the 1990’s, is back home on the Gold Coast.

He is undergoing a sinus operation today to clear a blocked nasal passage while catching up with his family.

After catching up with his dad and grandfather Sir Jack Brabham, he went for a track walk yesterday with David Brabham who has answered an SOS to drive in the #47 HHA Erebus Mercedes-Benz alongside Tim Slade.

The V8 call-up to replace Andrew Thompson is a diversion as he had plans locked in place to attend the Indian F1 grand prix this weekend to watch his son Sam, drive in the MRF Series support race.

“I raced in the Petit Le Mans ALMS race at Road Atlanta last weekend and on the Thursday before the meeting I saw an email from Erebus asking if I wanted to come out and do the Gold Coast race,” Brabham told Speedcafe.com

“I thought, okay, I was going to India for the F1 grand prix because my son Sam who did Formula Ford in the UK this year. We managed to do a deal and get him to India to do the MRF Championship. So he’s down there on his own.”

While Brabham, 48, is proud of Sam’s progress he is equally delighted by the news that Matthew’s career is set to rise to another level next year.

“From the family’s point of view we are delighted,” he said.

“The progression that he’s had since he arrived in America has been outstanding. I think the test for him will be next year in Indy Lights.

“That will give us a much better gauge of where he’s at.

“Certainly in terms of young up and coming drivers he’s the one that is the most talked about at the moment in America.

“He’s done a cracking job and he’s done exactly what he’s been told to do.”

Matthew’s dad Geoff had tremendous success in the US in Super Vee, a winner of four IMSA Championships, Can-Am, and IndyCar where he had a best place of fourth in the Indy 500.

“I don’t think people realise how much success my brother had in general in the US. It was a phenomenal career.

“So the way it’s happened for Matthew is kind of like it was meant to be.”