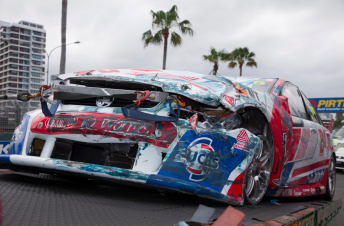 The front-end damage to the #8 Holden

Brad Jones Racing has rated its chances of the #8 BOC Holden returning to track action tomorrow as remote after Andrew Jones crashed heavily in Practice 3.

The session was only a few minutes old when Jones slammed into the tyre wall at Turn 3, causing extensive damage to the front left corner of the car.

Team co-owner Kim Jones painted a bleak outlook on whether repairs can be completed for the car to make it for the first 102-lap race at the Armor Gold Coast on Saturday.

With work unable to be completed on-site, the team will transport the Holden to Paul Ceprnich’s Pace Innovations workshop north of the circuit at Yatala.

“The damage is not good and there as a crease going all the way back to and well beyond the B-pillar,” Kim Jones told Speedcafe.com

“It has to be repaired on a jig and the closest one is at Cepi’s place.

“It’s a shame because the car was going strongly.”

Andrew Jones admitted that he had used too much kerb in the lead-up to the shunt.

“I’m obviously quite disappointed to have done damage to the car,” he said.

“It was a mistake on my behalf. I ran too much kerb at Turn 1. We were told not to use any kerb and that we’d be monitored closely and then we sat and looked at footage post Practice 2 and all the co-drivers were absolutely murdering the things.

“I arrived there first time in Practice 3 using a lot of kerb and it didn’t land as nicely as I’d hoped.”