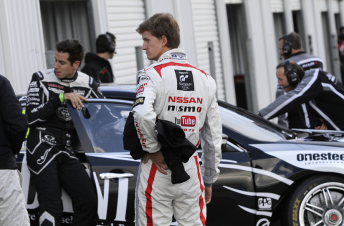 Lucas Ordonez at Winton in August

The scheme, which already operates in Europe, the USA, Germany, Russia and the Middle East/South Africa, sees Sony Playstation users compete for the chance to move into real-world racing.

First run in 2008, the Academy’s star pupil is Spaniard Lucas Ordonez, who took time out from his international GT and sportscar racing schedule to test an Altima V8 Supercar at Winton this August.

“It’s on the radar and the local guys are very keen to do it,” Nissan’s global motorsport director Darren Cox told Speedcafe.com of introducing the Academy to Australia.

“I would say that in the next two cycles of the academy, so in the next 18 months, you’ll find that there’ll be an Australian version of it.”

Cox added that, like the existing programs, an Australian example would see successful participants serve a “racing apprenticeship” in European GT competition before returning to compete in their home country.

Producing graduates who could race in the Pirtek Enduo Cup and eventually as full-time V8 Supercars drivers is the ultimate goal.

“The ladder system is difficult in Australia when you look at the championships you have and what is the best way to go,” he said.

“Formula Ford is being downgraded, Formula Holden disappeared… it’s not easy to make your way through to the top level. This will definitely provide another route through.” 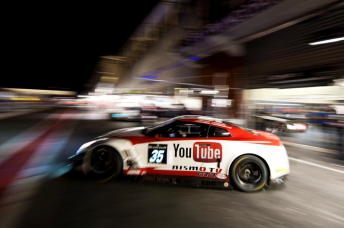 Nissan’s global driver exchange will come to Bathurst in February, and could see a V8 Supercars driver at Spa in July

In addition to the driver Academy, Nissan is charging ahead with its ‘global driver exchange’, which sees its stars sent around the globe, mainly for one-off racing appearances.

Rick Kelly is already confirmed to take part in Nismo’s factory GT-R assault on next year’s Bathurst 12 Hour, where he’ll likely be partnered by Ordonez and an amateur-level Japanese driver.

The concept is also expected to see a Nissan V8 Supercars driver invited to join Nismo at this year’s Spa 24 Hours, while Cox is pushing to have Todd Kelly race internationally as soon as January.

“I’ve already spoken to Todd about coming over for the Dubai 24 Hours,” he said.

“We’ve got two Zs (Nissan 370Zs) entered for the new (Academy) winners as part of our training program and we want international drivers, so if Todd wants to come to the Middle East in January then he can do so.

“I’d like to get James Moffat over sooner rather than later as well. I think he’s a good young talent that will adapt well to international racing.”

In exchange, Cox promises there will be visiting drivers in next year’s Supercheap Auto Bathurst 1000, either as a one-off wildcard or as part of the team’s regular co-driver line-up.

Having both tested at Winton, Ordonez and German Michael Krumm are the most likely candidates, provided that the races don’t clash with their existing commitments.

“For now all I can say is that there will be international drivers at Bathurst next year with Nissan,” said Cox.

“If circumstances were different we would have had internationals there this year.

“Unfortunately it was all a bit last minute and, not having had the test with Michael and Lucas, the team couldn’t see the level of drivers we were offering to them so they weren’t considered.

“But I think that Michael and Lucas did a good job down there, so as long as the calenders work for the three races, then we’ll send them down.”

CLICK HERE for Speedcafe.com’s chat with Cox and Nismo president Shoichi Miyatani from earlier this week about the state of the company’s V8 Supercars program