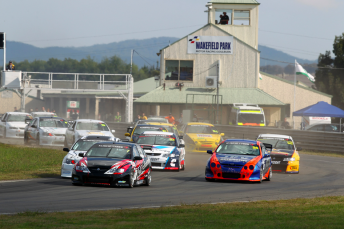 The Kumho V8 Touring Car Series will return to Wakefield Park in 2014 as part of a revised calendar.

Run on the Shannons Nationals bill, the series will remain at six rounds, kicking off at Mallala in April.

Winton, Queensland Raceway, Phillip Island and Sydney Motorsport Park also return, albeit with the New South Wales venue shifting from the season opener to the final round in line with the Shannons Nationals.

The penultimate round will take place at Wakefield Park in Goulburn, while Sandown, which will host the 2013 season finale, has been left out due to a date clash with the V8 Supercars Championship.

Wakefield Park last hosted a round in 2011, although did hold a non-points ‘heritage’ event for ex-V8 Supercars last year.

“Going to Wakefield Park again gives us a variety of race tracks and improves the balance of race meetings, which this year has seen one round in New South Wales and three in Victoria,” said KV8TC manager and Shannons Nationals series director Rob Curkpatrick.

“We’ve decided against running at Sandown to avoid a clash with the Symmons Plains V8 Supercar event and also so we are not running there ‘back-to-back’ as the last round of 2013 and the first round of 2014.

“Compiling a calendar is always a difficult project. We wanted to avoid clashes with the Australian V8 Supercar events, provide a variety of tracks across four states as well as fit in with other categories part of the Shannons Nationals family.

“While the calendar is a bit different from what we’ve had in recent years, there is plenty of challenge and variety for teams and drivers next season.”

See below for the full Kumho V8 schedule