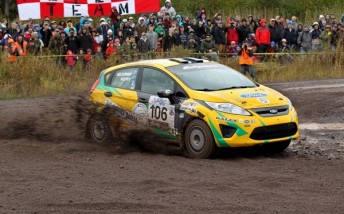 Australian Brendan Reeves has won the Rally America two-wheel-drive title on his first attempt with victory at the Lake Superior Performance Rally held in Michigan.

Despite missing the opening two rounds in the series, Reeves and co-driving sister Rhianon Gelsomino won the 2WD category in the next five-straight rallies to overhaul Canadian Andrew Comrie-Picard.

Round seven of the Rally America series proved to be the biggest test of the season for Reeves. Aboard the Team O’Neil Ford Fiesta Reeves came into the event just three points adrift in the championship standings and only victory could guarantee the title.

The Lake Superior Performance Rally was a two-day event covering 17 stages and 145 competitive kilometres. Rally organisers were forced to amend the route earlier in the week due to the US government shut-down which meant that the six different stages used were each run multiple times.

Reeves held the balance of power on day 1 of the event despite temporarily losing the lead to Comrie-Picard when a rock jammed between the rim and brake calliper on Fiesta R2. Holding a 13.4 second lead at the overnight break day 2 was almost a carbon copy of the opening leg. Reeves was dominant early and held a 12.2 second lead half way through the day’s stages but on stage 14 he was again slowed when another rock jammed the real wheel and Comrie-Picard took the lead.

With just the final stage of the rally to go, Reeves and Gelsomino were three seconds behind their rival and knew it was now or never. They charged through the stage, beating Comrie-Picard by nine seconds and taking the rally win by 6.6 seconds. In doing so, not only did they make it five wins from five starts in the US, they also claimed the 2013 Rally America 2WD Championship.

“It’s an awesome feeling to have won the Rally America 2WD title,” Reeves said. “This weekend was a real battle with ACP and it feels so good to have come out on top.

“A huge thanks go to Team O’Neil Rally for preparing an amazing car. The Fiesta has been brilliant throughout the championship and it has been fantastic to be part of the team.

“Rhianon and I would also like to thank all our supporters and sponsors – without them, the opportunity to rally in America wouldn’t have been possible, and winning the title is a great way to thank everyone for their support.”

Reeves and Gelsomino’s next event is the final round of the 2013 Australian Rally Championship, Rally Victoria, which will be based in Warragul from November 15.