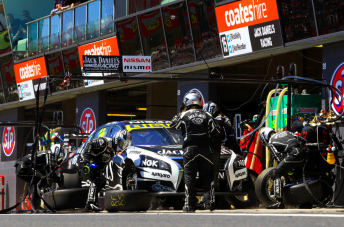 Nissan’s recent return to Bathurst was less than spectacular

Nissan’s Melbourne-based V8 Supercars effort is expected to enter 2014 with sharpened aerodynamic and engine packages thanks to the mobilisation of the company’s global performance giant, Nismo.

SPEEDCAFE: Gentlemen, clearly there is a push starting to happen from Nismo on the V8 Supercars program with an engine coming over from Australia. What can you tell us about the plan there?

SHOICHI MIYATANI: Well, without talking in too much detail, we think that the engine performance needs to be improved a little bit more to be competitive in Aussie V8s.

At the start of the year this program was really considered to be Nissan Australia’s program, so we gave the Kelly Racing team (only) advice on the engines.

SPEEDCAFE: Is this short term help from you guys or an ongoing development program?

MIYATANI: If a short term solution can fix the problem, then that’s fine, but we should monitor the situation; not only with engines but also, if necessary, the aerodynamics. We may need to help them. 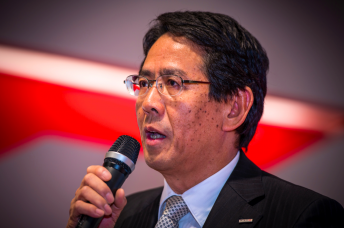 SPEEDCAFE: Aerodynamics have been talked about a lot in the last month…

DARREN COX: I think on the aero side there are enough guys down there (Australia) in that area with talent that can deliver.

What the guys down there want is access to some of the technologies that Nismo has got in terms of understanding of CFD and everything else which, rather than buying in, they can use some of the suppliers and systems that we already use.

I don’t think Miyatani-san’s team will end up designing the parts, but certainly they can provide expertise on processes and systems.

We’ve got Ben (Bowlby, Nissan’s head of motorsport innovation) talking to the guys as well about aerodynamics, but he’s not going to be drawing the front splitter. It’ll just be advice and help because at the end of the day, as Miyatani-san said, you can’t do everything centrally, and the guys (in Australia) know the championship better than we do. So it’ll be a mixture of all the parties involved.

But from my side having been down there (to Bathurst), I think that the aero kit that we had on the car was more of an issue than the engine power. We’ve been chasing engine power and I think that we’ve gotten close to where everyone was at the beginning of the season now.

If you look at Bathurst, where we were losing the speed line was aero. It was over 200km/h that we started to lose the pace compared to everyone else.

SPEEDCAFE: It was obviously a rush to get the cars ready for the start of the season and a lot of the package had to be locked in before the aero testing in order to fit the timelines. Do you think you were too conservative with what you brought to the test? Or are you saying that the methodology that V8s uses needs to be changed? 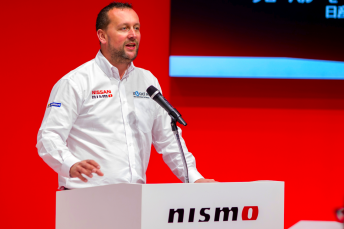 COX: Absolutely the methods are archaic. To do coast down tests to balance a car like that is not the way to do it.

As you know, the V8 guys were forcing us to do certain things with the aero pack to balance the car. In the end they’ve balanced it in the wrong way and we’ve ended up with a top speed deficit. Unfortunately it’s resulted in a lot of bad publicity for us over engine performance, but actually a lot of it is down to the mandated aero pack that we were forced to run.

We’ve been given approval to change the aero pack, which is again a load of money that we shouldn’t be having to spend, and we will get rebalanced when Volvo get their balance as well. Fingers crossed that they get it right this time.

But already the commitment of Steve Horne (recently appointed head of the V8 Supercars Commission) is… he’s already said that it’s unacceptable the way that they’re measuring the cars. We need to get into the new millennium through CFD (Computational Fluid Dynamics), etc.

SPEEDCAFE: Is a windtunnel program part of what you’re pushing for? That was obviously something that the team (Kelly Racing) put forward last year.

COX: No, I think CFD is more than enough in this area. The Kelly guys did try to get windtunnel testing happening last year but there wasn’t the desire or the finance to do it. I think CFD is a good process. 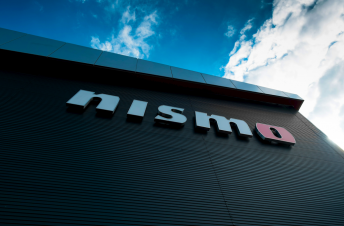 SPEEDCAFE: You’re obviously confident that the aero problem is coming from the panels that can be easily re-homologated, rather than as a result of how the body has been made to fit the chassis.

COX: No, it’s all in the aero pieces. For example, the gap between the boot and where the rear wing is, we’re not getting the right airflow from the boot onto the rear wing, or it’s detaching and the two are competing with each other.

It’s simple stuff like that which means new body panels, but not redesigning the car, by any stretch of the imagination.

SPEEDCAFE: Fuel economy is clearly a big issue. Can Nismo’s help with the engine program bridge that gap?

MIYATANI: The fuel economy is something we will look at, but I’m not sure it’ll be critical for us.

COX: It’s all linked. If we’ve got loads of drag then we’re using more fuel. We need to try and knock over the problems as they come.

SPEEDCAFE: Miyatani-san, having not been directly involved until now, I’m interested in your view of how the project as a whole has worked to date.

MIYATANI: The project itself started in a little bit of a rush, I’d have to say. It was strongly pushed by the Nissan Australia team to promote the image of the Altima as a sports sedan, not just a luxury car. I think it was the right choice, but execution wise we did start a little bit in a rush, so we are trying to fix the situation.

Each race (series) has its own unique kind of character. The engines, the aerodynamics, the chassis, the driver, the team operations, everything, you need to have at a certain level.

For example, in Super GT in Japan, if you have a good engine or a good driver, just one piece of it isn’t enough to win the race. You need local expertise and knowledge about how you should be fighting in the race.

For the Australian race, honestly, Nismo doesn’t have a real local knowledge for this race in order to win. So we are trying to help the areas we can help, particularly on the engine side, because it’s our engine.

COX: Miyatani-san makes a very good point about each championship being different. The thing that I’ve noticed the second time I’ve come (having attended the Clipsal 500 earlier in the season) is the myopic nature of Holden.

In the DTM, Mercedes and Audi wooed BMW for years trying to get them back in. When they did come back, it was that much of a level playing field that BMW won the championship first year back.

But you go down to Australia and there’s this view that Nissan can’t win for the first two years because it needs to do the hard work. Well we’ve done the hard work. We’ve put a huge amount of money in, we’ve put a huge amount of resource, we’ve got a good team with good drivers and good engineers, and yet the view of Holden is that ‘they need to do the hard yards’ and that they’d rather us not be there.

It’s no problem for Holden, they can go and have a one make series. The attitude of the championship, the organisers and the manufacturers, specifically Holden, need to look at the best practice in the DTM and Super GT in working together with manufacturers.

At the moment it’s this historic ‘I’m red, you’re blue and never the twain shall meet, we can’t work together’. Well ok, the championship will die in five years then. Holden need to really wind it in and welcome the new manufacturers. Otherwise we’ll walk away again.

SPEEDCAFE: Does the structure of the Commission need to change in order to avoid what we’ve seen this year?

COX: Absolutely it needs to change. It’s a crazy way of managing it. It’s like the old saying of turkeys voting for Christmas. It’s not acceptable, and I think that the new chief, James Warburton, wants to change it. Whether he can or not we’ll wait and see.

SPEEDCAFE: You mention having put a ‘huge amount of money in’ earlier. Has it been more than you originally budgeted for?

COX: From a cash out point of view for Nissan, no, but Kelly Racing have made significantly more investment than they were planning.

From our side, now we’re making engineering commitments which takes focus away from other things and maybe stops other projects. So not necessarily in terms of cash out, but in man hours and effort, yes, we’ve put more into it than we planned to.

SPEEDCAFE: To finish back with the engine. We saw a cylinder head development at Bathurst, but it has been said from the team that you might actually need to stop an assembly plant at some point soon to make some more serious cylinder head casting changes. Is that on the agenda?

COX: The experts at Nismo are looking at all areas with the Kelly boys and we’ll see what the answers are. What’s interesting is that with the amount of experience Nismo has got with V8s, there might be something that they can just pull off the shelf and put on the dyno and find the power we need.

I doubt it’ll be that simple, but certainly the knowledge and the hardware that we’ve got at Nismo might mean we can avoid that.