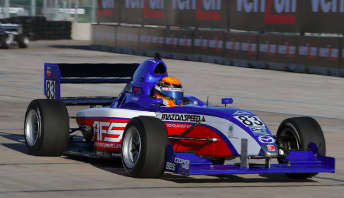 Brabham becomes the first driver to advance in succession on the Mazda Road to Indy platform from the Cooper Tyres US2000 Championship to Pro Mazda and the Indy Lights series.

“(I’m) very pleased to announce that I will be running the 2014 Indy Lights series,” Brabham confirmed on his Facebook page.

“My season with Andretti has been incredible,” the 19-year-old said.

“I can’t describe the job they (Andretti’s Pro Mazda team) have done this year. Every single session, we have been 100 percent on top of our game and it translated into results.”

Brabham scooped an incredible record 13 wins in the #83 Andretti Autosports-prepared machine from 16 races in the Pro Mazda series.

His 15 podium finishes and 13 fastest laps were also a season record.

Brabham’s deal comes as Andretti Autosport announces a multi-year deal to use Honda engines from 2014 on its IndyCar program.