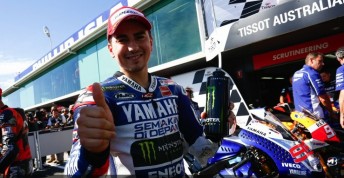 Honda’s Dani Pedrosa was second with Valentino Rossi holding off a three-way battle pack to claim the final podium spot.

Lorenzo, Marquez and Dani Pedrosa were in a massively close battle during the entire first half of the race until the series of mandatory pit stops came into play.

Marquez and his Honda team however made a huge mistake by pitting one lap too late and the #93 bike was handed a black flag with five laps to go – disqualifying the World Champion from the race for ignoring the pit window time.

On Marquez’s re-entry to the circuit at pit exit the difference between he and Lorenzo was so close the pair collided momentarily at turn 1 but fortunately both riders rode off with Lorenzo holding the lead and Marquez slipping back to third.

“Today has been a crazy race,” said Lorenzo.

“We practiced the bike swap a lot before the race and this helped a lot because we held our race position on re entry.

“25 championship points is a great result and the championship is still open but we will see what happens in Motegi because there is a lot of quick riders.”

With 11 laps to go Pedrosa left the epic battle to stop for his mandatory bike swap but exceeded the pit lane speed limit and was ordered to relinquish a position by race officials, which he did to teammate Marquez, until Marquez was ousted on lap 14.

Rossi, Cal Crutchlow and Alvaro Bautista were in a battle for the entire race and with Marquez’s exit the pair battled it out hard for the final podium spot over the closing laps.

To add excitement to the what was a very eventful Grand Prix the rain began to fall on the closing lap of the race but the remaining riders managed to bring their bikes home unscathed.

Both Australian riders Damian Cudlin and Bryan Staring also fell foul to the same black flag infringement as Marquez in what was a disappointing end to their home event.

In the Moto2 race Pol Espargaro retook the World Championship lead in the absence of Scott Redding after winning the race.

Tom Luthi and Jordi Torres completed the podium, with Australian Ant West successfully finishing in the top ten at his home event.

Alex Rins won a thrilling Moto3 race coming out on top of a multiple-rider battle ahead of Maverick Viñales by just three thousandths of a second.

One of those in the battle was young Aussie ace Jack Miller who finished fifth, just six tenths of a second behind the race winner Rins.