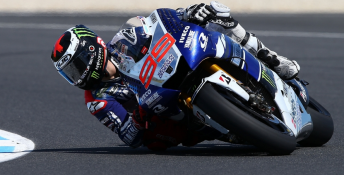 With a minute to go Lorenzo set a blistering 1:27.899s lap, the first time MotoGp machinery has ever gone sub 1m28s around the Victorian circuit.

“Casey was always unbelievably fast here but this lap of a 1:27.8 today I honestly believed I could only do on a Playstation!” Lorenzo said.

“The tyre has worked very well today but we will see what happens in the race tomorrow.”

Championship leader Marc Marquez was second with the other Yamaha of Valentino Rossi rounding out the front row of the grid in third.

In a bizarre opening lap incident Jorge Lorenzo collected some local wildlife and proceeded, unbeknownst to the rider, with a seagull wedged in the fairing of his Yamaha for two laps.

The aero addition didn’t phase the Spaniard however as he broke Casey Stoner’s 2008 lap record on his second flying lap.

This was short lived however as Marc Marquez immediately knocked Lorenzo off his perch as riders headed back to the garage midway through the session.

The two CRT bikes present in Q2, Randy De Puniet and Colin Edwards, both went down in the early stages of Q2 but walked away unscathed from the high speed accidents.

With De Puniet not setting a flying lap, Edwards qualified his Kawazaski in 11th and the top for the CRT class.

Earlier on in Q1 the two Ducattis of Andrea Dovizioso and Andrea Iannone both advanced to Q2 after occupying the top-2 spots by the end of the session.

Aleix Espargaro was the unlucky rider to first to miss out on Q2 and was unhappy with Yonny Hernandez, showing his frustration towards the rider on the warm down lap.