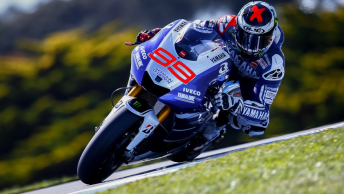 The Spaniard began the day with a 1:29.167s lap in the opening practice session
as he quickly found the set-up on a brilliantly fine spring day at the picturesque circuit.

In the free practice 2 Lorenzo dipped under 1:29 by spearing to a 1:28.961s to head the session from Bautista (Gresini Honda) with Dani Pedrosa third best.

It was an indifferent start for Marquez who had a spill at Lukey Heights and was unable to better his time before finishing the session sixth fastest.

Stefan Bradl was declared unfit to continue at the meeting after finishing 20th in the opening practice run.

Bradl fractured his ankle in a tumble at the Sepang circuit last weekend.