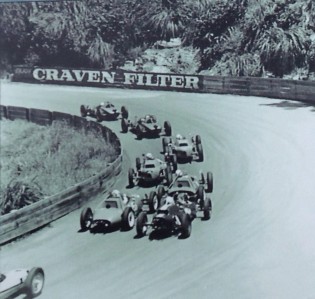 Catalina Park in its heyday

Echoes of roaring engines filling the air from the gully have long subsided but the remnants of Catalina Park remain.

While major motor racing meetings ceased in the 1970’s the track continued to host minor events until the 1990’s.

Catalina Park, which was declared an Aboriginal Place in 2002, has joined a long list of racetracks in Australia which are no longer used.

Known as ‘the gully’ because of its geographic location at Katoomba in the Blue Mountains, the facility remains untouched but the sands of time are starting to catch up with parts of the circuit collapsing through water seepage.

The story of Catalina Park began in 1957 when planning began to build a racetrack at Katoomba Falls Creek Valley.

A plaque near the original pits documents that when the circuit was being constructed, homes and bush were destroyed while the bulldozers gouged through the aquifer destroying the original spring.

The challenging 2.1km fast and undulating circuit began operating on February 12, 1961, and was run by the Australian Racing Drivers Club until 1969.

Catalina Park is nestled in a natural amphitheatre and was notorious for bitterly cold winter race meetings when thick layers of fog often played havoc with race schedules.

Catalina Park preceded Oran Park and Amaroo Park circuits and even though it was a decent drive from Sydney the venue drew bumper crowds who came to see the cream of Australia’s circuit racers and riders. 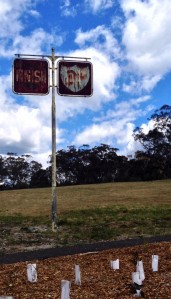 Matich also starred in Sportscars along with Niel Allen, Fred Gibson, Spencer Martin and others.

Touring cars were also very popular with the Mustangs of Norm Beechey, Ian Geoghegan, Niel Allen waging epic battles against Chev Camaros, Holden Monaros and the Minis of Brian Foley and Peter Manton as well as many Lotus Cortinas.

Bob Jane survived a massive crash in 1965 with his Mustang vaulting the Dunlop sleeper fence as it barrel rolled to a halt, with Jane emerging shaken but otherwise unhurt.

In the early 1970’s the venue enjoyed resurgence with the introduction of Rallycross, which had proven to be enormously popular at Calder Park in Victoria.

The Rallycross layout included part of the original bitumen racetrack and the dirt and gravel infield.

Drivers like Peter Brock, Larry Perkins, Evan Green, Frank Kilfoyle and Bob Watson were the stars on four wheels in the thoroughly entertaining discipline which had gained a nationwide TV following.

While it was intended for amateurs, many of the automakers entered teams.

Rallycross disappeared as quickly as it had arrived and by the 1980’s Catalina Park was only being used for single-car lap dashes before being closed for good the following decade.

Despite its short length, its sweeping turns and undulations allowed competitors to maintain high average speeds. 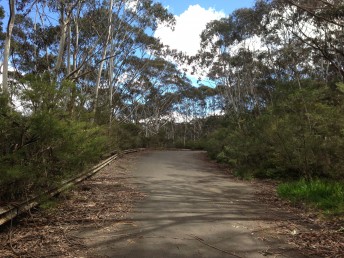 A section of Catalina Park today

The circuit, although gradually being swallowed up by the elements, is accessible from the Katoomba Sports & Aquatic Centre car park.

There is grass growing through the track in many places and part of it has collapsed between Craven A and Castrol corners while some of the advertising signs are still recognisable like the BP start/finish line marker post.

Frank Matich was a master at the course setting the first lap record after the course opening in 1961 and he fittingly holds the outright lap record at a blistering 53.4s in his Matich SR4 Repco 5.0 V8 in early 1969 which remains.