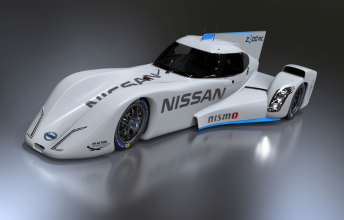 The car that Nissan will take to the 2014 Le Mans 24 Hours has made its first public appearance at the headquarters of the company’s performance arm, Nismo, in Tokyo, Japan.

First announced in June, the project will run under the Garage 56 slot reserved for experimental vehicles in the endurance classic.

The entry comes two years after Nissan’s involvement in the DeltaWing, which has since continued on its own path in the United States under the control of Don Panoz.

Nissan’s new car, dubbed the ZEOD (Zero Emissions On Demand) RC, sees an internal combustion engine, of which details are yet to be released, supplemented by electric power.

Nissan is using the project to gear up for an anticipated outright assault on Le Mans in 2015 with an electric LMP1 car.

It is said that the ZEOD will be able to complete one full lap of Le Mans using only electric power during each stint of the race, topping 300km/h on the Mulsane in the process.

Like the Deltawing, the ZEOD is spearheaded by former Lola and Ganassi Racing engineer Ben Bowlby, and run by Britain’s Ray Mallock Limited.

A showcar was displayed at last June’s Le Mans event, with the actual racecar’s testing in the UK being momentarily paused for its trip to Japan, which will also include an appearance at the Fuji World Endurance Championship event this weekend.

“This weekend is an important milestone in the journey to Le Mans for the Nissan ZEOD RC,” said Nissan’s global motorsport manager, Darren Cox.

“Our goal for the program is to draw back the curtain for the fans to see the innovative technology that Nissan is developing.”

German Michael Krumm will attend the Fuji event with the car. While some running will take place, initial plans to have the car complete a full lap of the circuit have been curtailed.

“The car moves at a reasonable pace but we haven’t yet got the confidence that we can do a lap at the pace that we want to,” said Cox.

Krumm has been drafted in to the ZEOD’s test program alongside fellow Nissan factory star Lucas Ordonez.