The HRT races to repair #22 Commodore

The HRT races to repair #22 Commodore 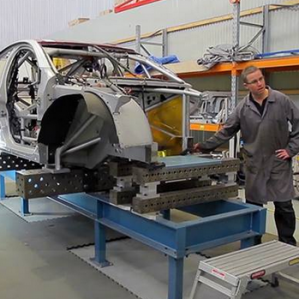 The damaged #22 chassis being straightened at HRT’s headquarters

The Holden Racing Team is confident of having the heavily damaged Commodore of James Courtney and Greg Murphy repaired in time ahead of the Armor All Gold Coast 600 starting tomorrow week.

The #22 factory Commodore was enjoying a strong run before Murphy admitted to an error when it slammed into the wall at 135km/h at Reid Park just after the midway point of the Bathurst 1000.

Data confirmed Murphy’s admission of driver error at the time, revealing he had carried too much pace into Reid Park.

Heavy contact to the left front has resulted in substantial chassis and body damage.

The chassis is being straightened on the team’s jig at its Clayton headquarters in Melbourne.

Repairs are continuing around the clock in order for the car to be finished and loaded into the team transporter on Sunday.

Murphy escaped serious injury in the accident but remains solemn over the incident.

“Physically, I’m fine; the car’s safety features did their job and prevented any neck or back injuries,” Murphy said.

“Mentally, it’s painful. I started thinking about what might have been if the crash hadn’t happened, I know James would have been somewhere in the mix with the leaders.”

“We’ve had a look at the data and I tried to carry a fraction too much speed,” Murphy said.

“Everybody has experienced highs and lows at Bathurst and I’m fortunate to have had plenty of highs, but the weekend was one of the lowest of lows. I feel for James and the team.”

Murphy said the crew have been putting in long hours in order to fix the Commodore ahead of the final leg of the Pirtek Enduro Cup.