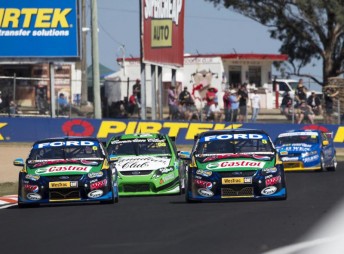 The FPR Falcons at Bathurst

Ford Performance Racing will debut a newly approved brand of dampers at this month’s Armor All Gold Coast 600 as it strives to add a championship victory to last weekend’s Bathurst crown.

An existing user of the Triple Eight-imported Sachs dampers, Oscar Fiorinotto’s locally developed Supashock units are expected to be run in two of the factory Ford team’s four cars at the Surfers Paradise event.

The Supashocks were seen earlier this year on Matt Stone Racing’s Dunlop Series entries before being outlawed in a bid to reign in development avenues in the second-tier class.

V8 Supercars recently approved the Supashocks to be raced in the main series from the Gold Coast onwards following work between FPR, the Adelaide-based Fiorinotto and the category on homologation.

The German Sachs brand had enjoyed a monopoly on the championship following the Holden Racing Team’s mid-season switch from its long-used Ohlins units.

“We hadn’t fully built up our damper stocks this year and rather than going out and effectively following the leader by buying more Sachs, we’ve gone a different way with a cost-effective Australian product,” Ford Peformance Racing team principal Tim Edwards told Speedcafe.com.

“We’ve already tested them on multiple occasions and have been very happy with their performance.

“We believe they should be a more durable damper as well; we bent 11 shafts last year on the Gold Coast due to the kerbs there.”

A second team is also understood to be considering running the dampers before the end of the season. 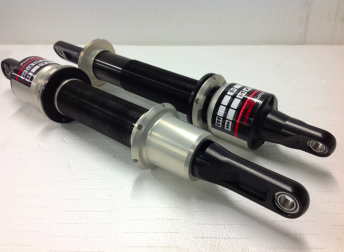 Supashock’s origins stretch back to 2006 when Fiorinotto, whose resume includes stints at Perkins Engineering, Gibson Motorsport and Team Dynamik, stepped back from full-time V8 Supercars commitments to start developing his own dampers.

Initially run in the Australian GT cars of South Australian businessman Kevin Weeks, Fiorinotto has since expanded into the international GT market.

Most notably, a version of the dampers was used by the Lamda Performance Ford GT team in this year’s ADAC GT Masters in Germany, with the squad winning three races under the guidance of Fiorinotto.

“I’m really proud to have taken the product overseas and the success we’ve had with it against factory GT teams,” Fiorinotto told Speedcafe.com.

“It only makes sense that we would bring them to V8 Supercars and add to the already high level of local content in the cars.”

Fiorinotto says that, following the addition of the dampers to the main series’ eligibility, his company is moving to a new location in Adelaide where it will “have the manufacturing capacity to service the whole field”.

“We’ve made a big investment and worked closely with FPR developing and homologating these shocks for V8 Supercars,” he said.

“We’re very keen to have other teams test them and see what they think.”

Like the Sachs, the Supashocks are a through-shaft damper and have been developed to accommodate the smaller 36mm front spring and the twin rear spring set-ups adopted by teams in recent years.

The Supashocks are two-way adjustable, rather than four, with Fiorinotto describing the set-up as a preference for outright performance over adjustability.

In addition to his engineering business, Fiorinotto travels to each V8 Supercars event providing simulation and strategy information to the category’s television coverage.