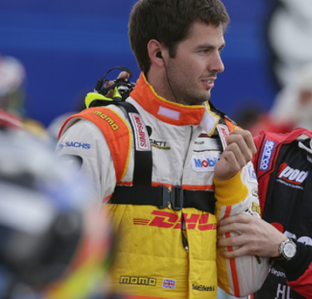 Porsche Supercup star Sean Edwards has been identified as the driver killed in an horrific crash at Queensland Raceway.

The Monaco-based Brit was in the passenger seat of a Porsche GT3 Cup car when it crashed at Turn 6 of the Ipswich circuit.

His girlfriend and mother have been notified of the tragedy in Europe.

Edwards was instructing a 20-year-old driver from Brisbane, who has been named as Will Holzheimer, the son of car owner David Holzheimer, when the car slammed into a tyre bank and burst into flames.

Members of Holzheimer’s family including his father ,who owns Dellow Racing, witnessed the horrific accident where young Will was trapped in the wreckage for several hours before being cut free.

Will Holzheimer remains in Royal Brisbane hospital in a critical condition with extensive injuries.

It is understood that Edwards was killed on impact while Holzheimer, whose life was saved through the heroic actions of several people at the scene, is believed to have suffered extensive leg and hip injuries.

The tragedy marks the second fatality at the circuit this year following the death of a 23-year-old motorcyclist at a ride day in June.