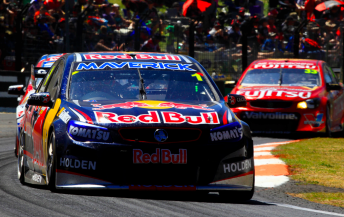 Whincup and Dumbrell missed out on a second straight Bathurst win

Jamie Whincup missed out on a fifth Supercheap Auto Bathurst 1000 victory on Sunday despite having a dominant car for much of the weekend.

The Whincup/Paul Dumbrell Red Bull entry finished all nine of the pre-race sessions in the top five; ending Thursday practice, Friday qualifying and Saturday’s Top 10 Shootout on top of the time sheets.

The #1 Holden was second when it mattered most, however, taking the race’s chequered flag just 0.5s shy of race winners Mark Winterbottom and Steven Richards.

Whinup and Dumbrell had led 68 of the race’s first 76 laps, with both drivers seemingly able to pull away from the field at will.

A decision to pit under a lap 87 Safety Car, however, locked the squad into an eight-stop strategy; one more than required under the compulsory pitstop rules.

Dumbrell had been just 10 laps into what was expected to be his final stint when the Greg Murphy crash induced yellow was called, and enjoyed an almost 20 second lead.

“We didn’t need to take it but because we were so far ahead we were going to lose all that time with the Safety Car anyway,” the car’s race engineer, Mark Dutton, told Speedcafe.com.

Two offs for Dumbrell at The Chase in his final 11 lap spell saw the #1 Holden temporarily lose enough ground that Whincup emerged behind Mark Winterbottom when the seven and eight stop strategies came back together just prior to lap 100.

“Nothing comes free, it’s risk and reward, and it didn’t pay our way because of that,” added Dutton of the time lost during Dumbrell’s stint in traffic..

“Getting in altercations and so on with other cars was always the risk.

“The other thing then was that in the second last stint as well the car wasn’t quick enough.

“We tuned it up in the last stop and after that it was all good but passing was just too difficult because of how strong the FPR car was out of The Dipper.”

Unable to stay with Winterbottom on the run to Forrest’s Elbow, Whincup decided on the final lap that his only chance was at Griffin’s Bend.

It was at the same corner 12 months earlier that FPR’s David Reynolds had thought better of making a lunge on Whincup for the lead; a decision that The Bottle-O-backed driver has since said he regrets.

“I thought I may as well have a crack at Mark, that is what Bathurst is all about,” said Whincup, who had been forced to the outside by a defensive Winterbottom.

“He braked relatively early down the inside and he had a bit of a panic and came off the brake.

“I’m happy I had a go and happy we both played it with a straight bat. It was all fair deal.

“The championship was not on my mind at all,” he added.

“It is the biggest race of the year and I’d prefer to be in the fence knowing I had a go then just run second.”

Both Whincup and Dutton lamented a lack of speed in the penultimate stint, with the latter noting that both the new generation cars and unique track conditions made the race more challenging than previously.

“This weekend we had to do quite different things to get the speed out of it,” he said

“It was one thing to get the qualy speed, where we were head and shoulders above everyone, and another to find speed when it really mattered most.”