Whincup/Dumbrell on course for Bathurst repeat 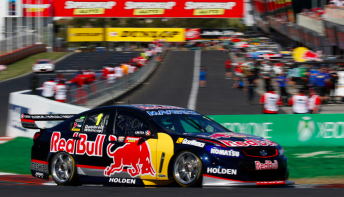 Red Bull Racing’s Jamie Whincup and Paul Dumbrell looked in control at the front as they led the Mark Winterbottom/Steven Richards Ford at the halfway mark of the Supercheap Auto Bathurst 1000.

The reigning race champions have built a healthy lead from the FPR Falcon of Winterbottom/Richards with Red Bull’s Craig Lowndes and Warren Luff in third.

Dumbrell started the race for the pole winning Red Bull Triple Eight Holden and produced the best get away.

He leapt into a healthy lead at Hell corner for the first time. His opposite number on the grid, Winterbottom, made a poor start and slipped down to seventh.

Jason Bright slotted into second with Shane Van Gisbergen in third and the factory Holden of Greg Murphy in fourth.

Another swift mover from the start was the GRM car of Scott McLaughlin as he jumped three positions to move into fifth.

Meanwhile another driver to lose out was the Bottle-O Falcon of David Reynolds, slipping from ninth to 14th position.

Bright began to push Dumbrell in the early exchanges but it wasn’t long before the Red Bull Racing driver found his rhythm and edged away from the rest of the field.

Further down the field the Dick Johnson Racing Falcon of Chaz Mostert, that started from the pit lane encountered further problems receiving a drive through penalty for a pit infringement.

By lap eight, both FPR Pepsi Max Ford’s sprung into life with Winterbottom and Will Davison passing Warren Luff for sixth at Hell corner and continuing to push forward.

Also on the move was McLaughlin, who had been applying intense pressure on Murphy for fourth.

He eventually slipped through on lap 11 and was followed by both Davison and Winterbottom.

At the front, a train had been forming behind Bright in second and it wasn’t long before van Gisbergen jumped the BJR car at Murrays.

Lap 12 saw the first drivers duck into the pits with Luff, Greg Ritter, Maro Engel and Matt Halliday all electing to stop.

The stops prompted the majority of the field to stop by the end of lap 20.

Meanwhile Dumbrell had built a nine second lead at the front.

All eyes soon turned to the battle for fourth with McLaughlin struggling to hold Will Davison and Winterbottom behind. A strong move from Winterbottom at Murrays allowed both Davison and Reynolds through.

Just behind this battle, the Erebus Mercedes of Lee Holdsworth and the wild card XBox One car of Andy Priaulx cracked into the top 10.

However, the race was neutralised on lap 21 when the Nissan of David Russell and Todd Kelly collided with a kangaroo at Griffin’s Bend.

Once the pit stop shake up had finished Whincup retained the lead with Winterbottom in second and Dean Canto in the Bottle-O Falcon in third.

Whincup was in the groove at the front moving into a five second lead and he maintained a healthy advantage until he pitted on lap 59, handing the car back to Dumbrell. They rejoined in fourth.

second for a while, before they briefly took the lead as a result of Whincup’s third stop.

Richards brought the car in on lap 64 and rejoined in fifth on the road but a net second, with Winterbottom back in control, handing Canto the lead.

Meanwhile Van Gisbergen’s charge in the Tekno Autosports car had faltered as they went a lap down on the field.

Canto’s third stop allowed Dumbrell to reclaim the lead with the Bottle-O Falcon rejoining in seventh.

At the other end of the field, there were problems for Tony D’Alberto with had a broken right rear shock absorber and a damaged wishbone.

Also in the wars were Mostert in the Greens Tuf DJR Falcon with a slow pit stop.

The crowd were presented with cracking dice on lap 70 when Craig Lowndes and Greg Murphy went side-by-side battling for third at The Chase, but the Kiwi held on to the position.

Lowndes soon ducked into the pits to hand over to Luff.

Dumbrell made his fourth stop on lap 78 and rejoined in fourth but he soon reclaimed the lead once the pit stop shake up was completed.

As the race reached the halfway mark, Whincup and Dumbrell looked in ominous form at the front leading from Richards on the road with Luff in third.

The top Nissan was the James Moffat/Taz Douglas in 11th with Lee Holdsworth/Craig Baird car in 15th the highest placed Erebus Mercedes.