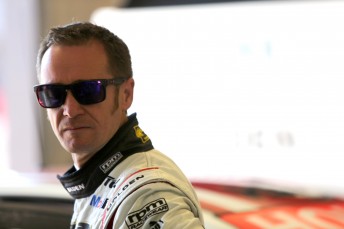 Four-times race winner Greg Murphy came away from what he describes as his biggest Bathurst crash with little more than a bruised ego.

Murphy made heavy contact with the wall coming into Reid Park just over the halfway mark of the Supercheap Auto Bathurst 1000 after just being passed by one of the factory Fords.

The Holden Racing Team driver admitted to driver error after being cleared by track medics soon after the accident which ended his and James Courtney’s promising run.

“It didn’t feel like that (something breaking in the rear). I either turned in a fraction too late or got in a little bit too aggressively,” Murphy said candidly 10 years after his famed lap of the gods record.

“It was weird; I hadn’t had a moment there. I had moments in other parts of the track today. It completely caught me by surprise.

“I just lost the rear and as soon as it got on the marbles it was gone.

“I think I will have a few tight muscles tomorrow but that’s to be expected. The pride is hurt more.”

Murphy described the accident as far worse than his well publicised incident with Marcos Ambrose at The Cutting in 2005.

Courtney said that the car will be rebuilt and he was relieved that Murphy had escaped without harm.

“He’s such a seasoned campaigner and he does a great job up here. It’s tearing him up.

“We’ll be right; we will rebuild the car and the good thing is he’s okay.”