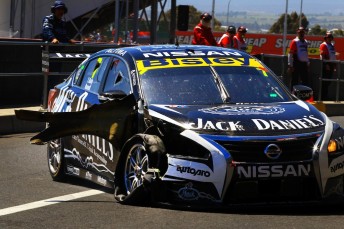 The #7 Nissan Altima became the first retirement after turning just 20 laps of the Supercheap Auto Bathurst 1000 following a nasty collision with a kangaroo.

Soon after Todd Kelly’s co-driver David Russell was starting his 21st tour the startled marsupial bounded across the track in the run up to The Cutting.

Russell, who was charged with starting the 161-lap marathon, had no time to react with the impact destroying the right-front cross member on the Jack Daniel’s Nissan.

“I just came up through Griffin’s and the kangaroo just hopped straight out,” Russell explained.

“I’m ready to grab fourth gear at that pace, so you are going pretty quick and next minute there he is in front.

“I just got a swerve on and obviously we hit quite hard on that right front.”

Kelly was shattered by the incident which left him without a steer in The Great Race for the first time in his career.

“It’s pretty hard to get your head around at the moment. I don’t think I’ve ever come to Bathurst and not turned a race lap,” a despondent Kelly told Speedcafe.com

“First year in a Nissan and I didn’t even get a chance to run around any other cars all weekend.

“I was looking forward to getting into the race to see where we are.

Kelly said that for the car to make a reappearance it would have required the engine to be removed and a complete rebuild performed after the entire bottom of the cross member was torn away.