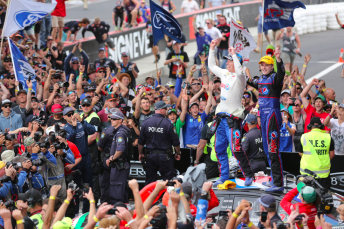 A day after re-signing Ford’s factory backing, the FPR crew watched on as Winterbottom survived an audacious outside passing attempt from Whincup on the last lap.

The victory is the third for Winterbottom’s co-driver Steve Richards, who also tasted success in 1998 and 1999.

Craig Lowndes won an equally intense battle for third in the closing stages to finish ahead of Garth Tander and Jason Bright.

The 161 lap journey was completed in record time, with just two Safety Car periods ensuring that the race record, set in 2010, was broken by 84 seconds.

The race was effectively run in two halves, with Whincup and co-driver Dumbrell dominating much of the early going.

The pair led all but eight of the first 76 laps as the field rattled through their pitstop schedules.

A crash for Greg Murphy on Lap 87 would prove decisive as, with a 20 second lead, the Red Bull team called Dumbrell to pitlane.

With the majority of their rivals staying out, the move put Dumbrell back in the traffic.

Two minor offs for Dumbrell in his final stint helped ensure that Whincup would be behind Winterbottom when the two primary drivers cycled back into their cars as the 100 lap marker approached.

The duo were locked together for the majority of the final three stints but, apart from an attempt at Griffins Bend on the last lap, Whincup proved unable to mount a challenge.

Eventual third place finishers Lowndes and Luff ran off sequence with the two heavy hitters during the first half of the race after completing a short first stint.

As was the case in 2012, Lowndes was simply left with too much to do in his final stints, resulting in a repeat of last year’s third place finish.

Jason Bright proved the biggest hurdle to the late charges of Lowndes and also the Tander/Nick Percat entry.

Bright’s Team BOC Holden ran line astern with the top two at the start of the final fuel load, but faded as the laps wound down.

That set-up a thrilling scrap with Lowndes and Tander, whose pit sequence ensured he entered the final 15 lap sprint with fresh tyres.

The trio swapped position back and forth until Bright’s tyres finally gave out.

Reynolds had briefly made it a four way scrap before being forced to pit for fuel with just two laps to go.

The Bottle-O Ford’s race took a major blow when Murphy crashed. Then running second to Dumbrell, Reynolds found himself spending a lap behind the Safety Car after missing the pit entry.

It was another green car, the Triple Eight-run Xbox Holden of Andy Priaulx and Mattias Ekstrom, that played a starring role in the latter stages.

The wildcard entry led a total of 17 laps between laps 104 and 134 as it ran on an alternate strategy to the leaders.

Although the team later said it always needed a splash of fuel to make it home, Priaulx emerged in front of the leaders when Winterbottom and Whincup made their final stops, raising hopes of a major upset.

The Briton was soon called back to pit road after a lock-up, however, setting the car into its eventual finishing position of 10th.

The Scott Pye/Paul Morris Holden ran the same strategy as the Xbox car and did make it home on fuel, taking a brilliant sixth.

Alexandre Premat meanwhile ran between Ekstrom and Pye during the penultimate stint and too appeared headed for a strong result until a fuel filler malfunction resulted in a black flag and a lengthy pitstop.

Among the others with hard luck stories were Courtney and Murphy, who challenged the seemingly dominant Red Bull and FPR cars in the first half until a mistake from the Kiwi at Reid Park resulted in a heavy accident.

The other Safety Car had been called following a collision between David Russell’s Nissan and a kangaroo on Lap 21.

A gearbox failure for Dean Fiore and Matthew Halliday was the only mechanical-related DNF in an impressive endorsement for the Car of the Future’s reliability.

The V8 Supercars Championship continues in two weeks time with the Armor All Gold Coast 600.