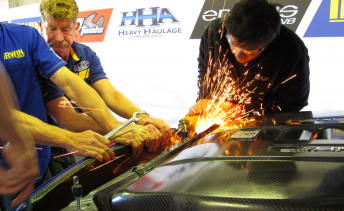 Dick Johnson Racing and Erebus Motorsport are confident that their tempestuous weekends are back on course after working through the night to make the final practice session.

Both teams were still applying the finishing touches to their cars as the 50 minute Practice 6 began.

Although a power steering problem ensured the Chaz Mostert/Dale Wood Falcon finished five seconds off the ultimate pace, team manager Richard Swan said he was pleased with the session.

“The car is fine and it should be in top shape for the race,” he told Speedcafe.com.

“Obviously we wanted to make sure the car got out there and ran okay, making sure it was safe to drive after the shunt and that the drivers were happy with it.”

Team owner Dick Johnson paid tribute to the efforts of his crew.

“That’s what team work is all about, the guys worked very hard and worked very well together,” he said of the rebuild.

“It was such a huge job to fix it and at 4am we were having a lot of trouble getting the engine to line up with the transaxle.

“We said let’s go home, have a think about it and come back tomorrow, and thankfully this morning it all came together pretty quickly. Tim Slade was likewise delighted with the efforts of his team, which had considered abandoning repair work on Thursday night.

The HHA Mercedes ended the session 22nd fastest after a best of 2:08.75s from Slade.

“I can’t say enough about the work everyone has put in getting everything repaired,” he said, having handed the car over to co-driver Andrew Thompson mid-session.

“If you looked at cars last night you wouldn’t have thought there was a hope of having it ready for today, but it was awesomse to be able to get some laps.

“The guys worked on it all night and it was perfect straight away. The steering wasn’t even out.”

A team van had arrived at the circuit on Friday afternoon with parts and the basis of a chassis jig needing to complete the repairs.

“About midnight last night we put the engine in and started rebuilding with the bits that arrived in the truck with the jig,” said Erebus general manager Ross Stone.

“Thankfully for us the engine and transaxle all lined up straight away; it was absolutely perfect.

“From that point everyone was on full steam to make it happen from this morning. I think we worked it pretty well without impacting too much on the other two (team cars).”

While Johnson yesterday lamented the increased difficulty of repairing the new-for-2013 Car of the Future cars due to the independent rear suspension, Stone said that the new rule package more than likely assisted in his team’s frontal damage repair.

“It’s hard to say, but I would say the way the bulkhead is that we were better off with this car than the old one,” he said.

Erebus had on Friday hinted that it would race the repaired chassis at Bathurst and the Gold Coast before ushering in a replacement for Phillip Island.

That plan, however, is now thought to be unnecessary.

“Quite often over the years you do repairs at the track to get through the weekend before taking it back to the shop and tidying it up, but none of this will need any attention when we get home at all,” he said.

The car will enter tomorrow’s race with the same engine that it was using on Thursday after the powerplant escaped structural damage.