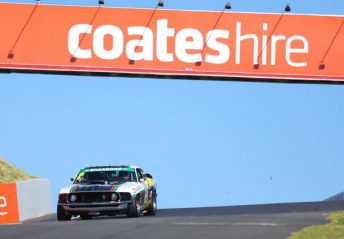 John Bowe has secured both Race 3 and round honours in the penultimate round of the Touring Car Masters at Mount Panorama.

Bowe put on a clinic at the spiritual home of the Touring Car Masters to move back up to second in the title race having been sat out of the previous hit-out at Sandown for disciplinary reasons.

The Tasmanian, starting from third by virtue of the earlier race results, led after barely a lap, having passed Adam Bressington around the outside at Hell Corner in a move which emulated Craig Lowndes’ move on Bowe just up the road in the 1994 Bathurst 1000.

Such was the dominance of the twice Great Race winner, he bolted to a lead of nearly 7.5s after just six laps, before easing off to a devastating victory.

Jim Richards was best of the rest in second, after passing Bressington up Mountain Straight on Lap 3, while Brett Youlden was third after doing much the same later that lap on Conrod Straight.

Keith Kassulke was fourth and Brad Tilley fifth, while Eddie Abelnica recovered to tenth after nearly stalling in grid box one at race start.

Just 23 of the 31 entries made the start of the only race to run full distance after the weekend’s earlier carnage.

Meanwhile, Andrew Miedecke has admitted liability for the monster Race 2 shunt which claimed he and Glenn Seton.

“We came onto Conrod Straight and I could see that Seton was a long way back in the mirrors,” Miedecke explained.

“Once I tailgated [Jason Gomersall] and got into the slipstream, then I jigged right.

“I didn’t realise that Seton had so much power in that car and that he’d be up alongside us.”