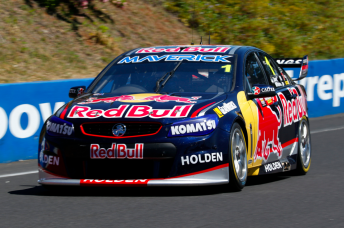 Jamie Whincup has recorded the first Bathurst pole of his career by edging out Ford rival Mark Winterbottom in the Top 10 Shootout.

The last car out in the one-at-a-time session, the Red Bull Holden driver was the only man to drop into the 2:07s.

A 2:07.88s was enough to eclipse the effort of penultimate runner Winterbottom by 0.2s.

Every driver bar Courtney and Reynolds managed to go to the top with their laps in a typically tense session.

Fifth man out Van Gisbergen proved to be the most spectacular of all runners, eclipsing the previous best of Craig Lowndes by a full 0.7s after throwing the Tekno Holden around across the Mountain.

Next man Bright’s tidier effort proved 0.04s to the good before the final laps from Winterbottom and Whincup.

A final pre-race warm-up session will be held on Sunday morning before the 161 lap contest.