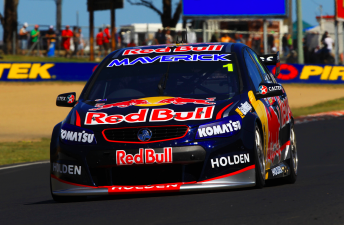 Jamie Whincup scored provisional pole ahead of the Top 10 Shootout

Jamie Whincup enjoyed the luxury of sitting out the final 10 minutes of qualifying on the way to provisional pole for Sunday’s Supercheap Auto Bathurst 1000.

Whincup, who had set the fastest time on Thursday and in Friday morning’s final pre-qualifying session, watched on as the remaining 27 car field failed to match his 2:08.05s benchmark.

Mark Winterbottom drew closest as the time wound down, ending up just 0.06s adrift in his Ford Performance Racing Falcon.

The Holdens of Jason Bright, James Courtney, Shane van Gisbergen and Craig Lowndes completed the top six, with the Red Bull driver enduring an off at Murray’s Corner on his final attempt.

It wasn’t all smooth sailing for Whincup, either, as the defending race winner clipped the wall at the exit of The Dipper during his second green tyre run.

The contact saw Whincup straight back to pitlane, before he quickly emerged to record what would remain the fastest time.

Winterbottom’s FPR stable-mates Will Davison and David Reynolds managed just seventh and eighth having elected to keep laps off their race rubber.

The Fujitsu GRM Holdens of Scott McLaughlin and Alexandre Premat completed the top 10 after knocking first Lee Holdsworth and then Garth Tander from the coveted Shootout spots after the chequered flag.

The most notable absentee from the top 10 was 14th placed Fabian Coulthard, who continued to struggle for straightline performance despite a pre-session engine change.

V8 Supercars rookie Mattias Ekstrom threatened to make a surprise appearance in the Shootout by running as high as seventh during the session, but could not improve in the closing stages and wound up 18th.

Just one place ahead was Michael Caruso, who proved the fastest of the four Nissan drivers.

Steven Johnson was 16th fastest in Erebus’ SP Tools Mercedes, with the team having made a late decision to rest primary driver Maro Engel in favour of the more experienced campaigner.

A final practice session will be held on Saturday morning prior to the evening’s Top 10 Shootout.