Solid start for Erebus in China

Solid start for Erebus in China 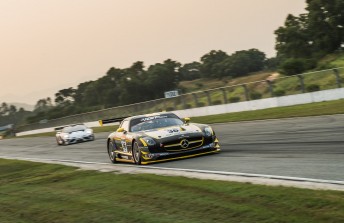 Erebus Motorsport’s GT team has had a moderate but trouble free beginning to its first event in the GT Asia Series in Zhuhai, with the performance of the SLS AMG GT3 being hampered by a heavier balance of performance minimum weight under the regulations.

Double Formula 1 World Champion, Mika Hakkinen is building himself up towards qualifying in his first competitive appearance in two years.

Hakkinen finished his session today in fifth placing among the pro drivers, whilst Lance David Arnold ended eighth in his first run.

In the second session, which was dedicated to the co-drivers and single driver cars, Arnold brought his Gullwing home third overall whilst young Matt Solomon is on pace with the World Champion, finishing the session in fourth placing.

Kiwi Earl Bamber’s car has been in the top three throughout the day.

27-year-old German racer, Arnold was the most vocal of the Erebus team about the extra weight they are carrying, given it is the first time that an SLS AMG GT3 has been racing in the GT Asia Series – which sets its own BOP figures.

“Erebus Motorsport team has done a great job and prepared a fantastic car  – but with the high additional weight in our car (under Balance of Performance) we can’t go any faster.

“Due to this, after a few qualifying laps the brakes will come to their limit because of the high weight. Let’s see what’s possible in qualifying, but I’m feeling very comfortable here.”

GT Asia Series made a late change to the minimum weight to some of the competing marques in the series, with Aston Martin to carry an extra 35 kgs, Ferrari 458 Italia GT3s an extra 55kg and a further 25kg for 2012 specification Ford GTs.