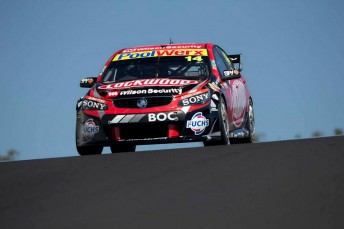 The Lockwood Holden at Skyline

Fabian Coulthard will tackle this afternoon’s Bathurst qualifying session with a fresh engine after straightline struggles triggered an unscheduled change.

The Lockwood Holden has proven unable to match its sister Jason Bright/Andrew Jones BOC entry in a straightline so far this weekend, leaving the team searching for an answer.

Although some teams have engine changes scheduled for after Saturday’s Top 10 Shootout, BJR had been planning to run their powerplants right through the weekend.

“We’re not 100 percent sure it’s the engine so we’re just working through a process of changing different things to work out what’s wrong.”

Despite the issue, Coulthard and Youlden have been turning competitive times during the day so far, finishing sixth and seventh in their respective morning practice sessions.

Team-mate Bright was second fastest in Practice 5 and looms as a threat for top qualifying honours this afternoon.

The 1998 Great Race winner’s charge was halted yesterday by a driveline failure on Conrod Straight that brought out one of three red flags in Practice 3.

Despite the Albins transaxles looming as the biggest reliability test on the new-for-2013 cars, Jones says the Thursday failure was not of particular concern.

“We were running some pretty high kilometre bits and pieces in the car and, it’s never ideal when something isn’t working right, but I’m not too concerned about it,” he said.

“It was just unfortunate, especially because we would have ended the day fastest if they hadn’t of extended the session.

“This weekend is going to be a real test for that componentry (driveline) and hopefully we won’t see any fail.

“I think we’ve done the right thing with the ratio,” he added after the idea of changing to a taller gear ratio for the weekend was dismissed on Thursday.

“We were just touching it (the rev limiter) this morning with a bit of a tail wind, which isn’t a good thing, but everyone ran for a long time on the limiter at Sandown and there weren’t too many issues.”