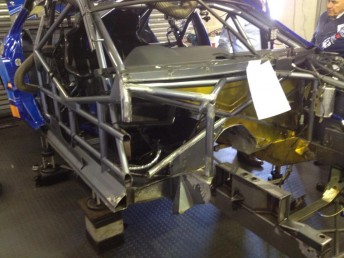 Erebus Motorsport is adamant that it can repair Tim Slade’s Mercedes in time for the Supercheap Auto Bathurst 1000, with the team now aiming to have the car back on track as early as Saturday morning.

Slade made a mistake entering The Cutting in the third and final session on Thursday, with a clip of the inside wall sending the #47 E63 AMG heavily into the outside concrete.

The team’s crew worked in shifts through the night to cut away the damage to the car’s right-front corner, and are currently waiting on the early afternoon arrival of a support van from the team’s Gold Coast base.

Ross Stone, whose team’s only Bathurst win came in 1998 after a heavy practice accident, said that the rebuild will be the biggest he has ever attempted at a race track.

“Our initial thoughts were that we would be aiming for Sunday’s warm-up, but we’ll see if we can get it ready for tomorrow morning’s practice,” Stone told Speedcafe.com.

“The accident data recorder showed it was 33G, so it was a big one. It’s the most damage we’ve ever tried to repair at a race track.

“The damage is all in the right front. The wheel went back into the cage when it hit the fence, so we’ve cut all that back and are just sorting it out.

“We’ve got parts of the chassis jig coming down in a van that’ll be here with a whole lot more parts at lunch time.

“We’re confident we can repair it to be as good as new. All the race gear is going in now, like the transaxle and so on, so it’ll be built up like a new car.”

A total of 28 cars will take part in today’s two practice and single qualifying sessions after overnight repairs to the Jeld-Wen Ford of Alex Davison.

Following its heavy accident at Reid Park in Practice 3, the Ford Performance Racing-run Falcon was pieced back together earlier than expected with the job completed just after midnight.

The rear of the car faired worse with part of the rear sub-frame and pick up points needing to be re-fabricated as the crew began reassembling the Ford around 10pm.

“It’s a relief to see the car back together and the guys did a super job to have it completed just after midnight,” Davison told Speedcafe.com.

“Looking back at the accident I really don’t know what the rear snapped so suddenly but its the ugliest car I’ve ever driven here.

“I may have even struck some debris from Slade’s car because he had gone in up there before.”