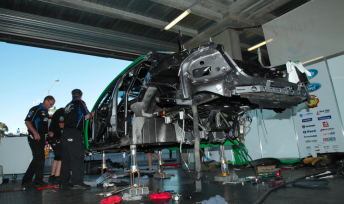 Mostert lost control of the Falcon through Reid Park, making heavy contact with the concrete on both sides of the treacherous mountain course.

The accident put a somewhat ironic dampener on the event for DJR, which is campaigning the Mostert/Dale Wood entry in green hues to mark the 30th anniversary of Johnson’s famous crash in the original Greens’-Tuf at the 1983 James Hardie 1000.

Mostert missed the afternoon’s qualifying session following the crash, but is expected to be back behind the wheel for Saturday morning’s Practice 6.

Although Johnson was optimistic that the repair would be complete well before midnight on Friday, the three-time Bathurst winner expressed frustration at the difficulty in repairing the new-for-2013 Car of the Future vehicles. “We had to straighten one of the front rails and the crash protection sacrificial rails in the front were obviously bent, which was a good thing because that’s what they’re designed to do,” he told Speedcafe.com of the damage.

“The biggest problem is the rear end, like what Garry Rogers experienced in New Zealand (when Scott McLaughlin crashed), where if they bend the pick-up points down there it becomes a major repair and not that easy.

“Fortunately FPR had their rear suspension jig with them and I’ve got two of our fabricators down here as well, so we just chopped it up and fixed it.

“We’ll just have to see where it goes from here whether they want to try and make any changes to them to make them easier to work on and cheaper.”

Johnson said that the high cost of the repair had at least been partially offset by fans offering to buy the damaged panels.

“It was a really trying day because a lot of work went into preparing the car with the new livery and all of that,” he said.

“When you do things like that, you’ve got to do spares as well, but they weren’t complete, so we had to re-do all the doors internally.

“But the good thing is that people have been ringing up wanting to buy the old bits and we’ve sold pretty much most of them, which is a good thing.

Just one practice session remains on Saturday morning before the afternoon’s pole shootout for the 10 fastest drivers from qualifying.

Next Story LDM secures new backer for remainder of 2013