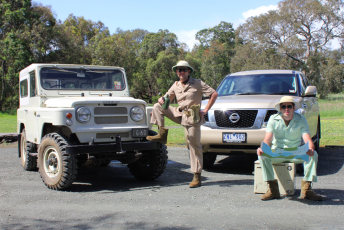 Todd and Rick Kelly pose with the two Patrols

Todd and Rick Kelly have continued their decade-long tradition of taking a relaxed journey to Bathurst from their team’s Melbourne base.

Having used a variety of mainly classic General Motors products in the past, this year has predictably seen a switch to Nissan for their road trip.

Rather than dip into Nissan’s current product range, the Kellys have enlisted a Patrol G60 for the occasion.

All going well, the G60, which was the first motor vehicle to successfully cross the Simpson Desert in 1962, will get the Kellys to Bathurst in little over a day.

A current model Patrol will tag along on the trip for co-drivers David Russell and Karl Reindler.

“We’re pretty excited about the road trip, we’ve done it every year and the tradition started back in about 2001 when myself Todd and Nathan Pretty took a Britz motorhome, nicknamed the Happy Camper, to Bathurst and it was a good journey and a great way to get to Bathurst,” said Rick Kelly.

“The trip takes just over a day the way we go about it and we turn up very relaxed and ready to attack the week.

“The Bathurst event is a big one and it does take a toll on you over the week, so it’s important to get there rested and in good spirits.

“It’s been a good way to do it in the past, so this year we’ve grabbed an old Nissan G60 Patrol, which has been a bit of fun. I’ve had it for a few days and it’s not the fastest thing, but it certainly can climb over the odd rock and sand dune.

Both products of Holden’s Young Lions program during the early 2000s, this year will mark the first for the Kellys driving anything but Holdens at Bathurst.

Nissan has not had a factory presence in the race since ending the Group A era with back-to-back victories in 1991 and 1992, although were represented in the two Super Touring 1000s in the late 1990s.