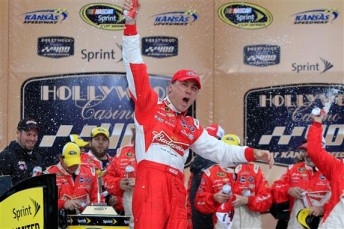 Kevin Harvick converted his pole position to win the Hollywood Casino 400 as the battle for the Sprint Cup title tightened.

Chase contender Kyle Busch crashed out, while Jimmie Johnson slipped from third to sixth on the final lap with a loss of engine power. It meant that Matt Kenseth’s 11th place finish was not as bad as it could have been.

The fourth race in the Chase ended as it began, with Harvick out front. The driver of the No. 29 Richard Childress Racing Chevrolet crossed the finish line more than a football field ahead of runner-up Kurt Busch, with Jeff Gordon trailing Busch in third.

The victory was Harvick’s third of the season, his first at Kansas and the 22nd of his career. With the win, Harvick moved into third place in the standings, 25 points behind Kenseth. Kyle Busch, who entered the race third in the Chase and 12 points behind Kenseth dropped to fifth in the chase and 35 points out of the lead.

“To sit on the pole and win the race, obviously, is a great weekend,” Harvick said. “Controlling our own destiny by doing that, putting ourselves closer to where we need to be with the championship race … so we’ll just keep having fun and doing what we’re doing.

“Out front, it was not even close, and in traffic, you were just another one of the cars and had a lot of trouble.”

The race had a record 15 cautions for 71 laps as teams struggled on a cool track and the Goodyear tyres.

Australia’s Marcos Ambrose made his way into the top-10 and he had a wild ride spinning off Turn 2. This dropped the Tasmanian to 30th, but with four fresh tyres made his way forward and then on the final round of pit stop he took fuel only and vaulted to fourth. He held his own early after the re-start but over the longer run he fell down the order, but kept things in-check to finish ninth.