Neuville makes all the right calls in France

Neuville makes all the right calls in France 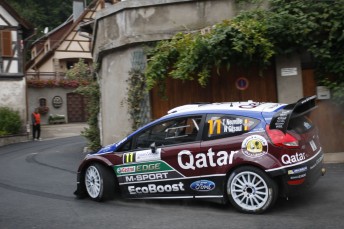 Thierry Neuville has the lead in France

Thierry Neuville has used good driving and smarts from his Ford crew to head the Rallye de France – Alsace.

Calling the right tyre choices in changeable weather was a key as the Ford Fiesta RS driver got the package just about right. Neuville’s day started well, with an inspired tyre choice for the opening loop of three stages. While the majority of the WRC runners chose Michelin’s hard compound tyres, Neuville gambled on a mixture of hard and soft rubber. When rain made things damp on the day’s second test, he benefitted from the extra grip of the soft rubber.

His Qatar M-Sport did the opposite in the afternoon switching to hard all-round while others went for the mixed tyre option. This time it didn’t rain and the Belgian was in the box seat on the asphalt event.

“I’m really happy with how the day has gone,” said Neuville.

“We had the best information, our weather guy did a good job, and we made good tyre choices. I felt comfortable at the wheel so I was able to push quite hard.”

On his WRC swansong, Sebastien Loeb held the lead for much of the day. The Frenchman’s legendary sense of grip kept him out front throughout the morning, even though he faced more rain than most on SS3.

On the wrong rubber in the afternoon he lost ground to Neuville, including just under 10 seconds on the final stage.

“We counted on the rain and there was no rain,” Loeb said.

“We had the soft tyre and on the long stages it was very difficult. Neuville was fast. For sure we couldn’t match his speed. We’ll see what we can do tomorrow.” Loeb ended the day fourth, 12.2sec off the lead.

Power Stage winner Dani Sordo snatched second from Loeb on Friday’s final test. Reinvigorated by his recent victory in Germany, the Spaniard has been in sparkling form and a top-three stage finisher on all but one of the tests so far.

Latvala is third, just 1.9sec adrift of Sordo. The Finn has had a trouble-free day, and felt his wet pre-event test had helped him in the rain on SS3.

The much-anticipated duel between Loeb and Sebastien Ogier was one of the casualties of the day. Newly crowned World Champion Ogier lies fifth in his Polo R, 16.5sec behind his team-mate.

“This morning I found it difficult to wake up,” said Ogier.

“This afternoon I tried to react and it was better, but I was still too slow. Unfortunately we didn’t have the right tyre choice…”

A frustrated Mikko Hirvonen is eighth, more than 1min 30 seconds off the lead after a day in his least favourite conditions.

“We made a few mistakes this morning, and then we made the wrong tyre choice. We expected rain, and on the soft tyres the car was moving a lot. It was very difficult.”

The rally is far from over with two days remaining including seven stages on Saturday around Strasbourg.