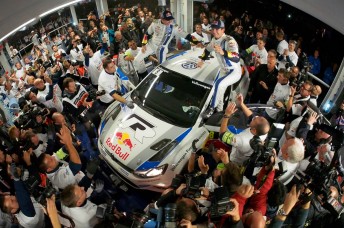 Celebrations in the VW service area

The Volkswagen driver was third fastest on the Power Stage, which for this event was the opening test of the rally, behind Dani Sordo (Citroen) and Thierry Neuville.

The single point awarded enough for the Frenchman to win the world title after narrowly missing the honour at Coates Hire Rally Australia last month.

Neuville needed all three points to keep the fight alive, but when his time was confirmed as 0.7sec slower than Sordo’s, Ogier had wrapped-up the title with this event and the next two rallies still to be run.

“It’s great after only five Ks on this rally and now I can really push for the rest of the weekend.

“The main goal of this year is in the pocket and I’m so happy for me and the team in its first season is amazing.”

The power stage was a three-lap run through the streets of Strasbourg alongside the European Parliament building.

Citroen DS3 WRC driver Sordo now leads the rally from Neuville, with Ogier third, 0.1sec further back. It was another great performance from Sordo, who won the last all-asphalt round in Germany and who was fastest on this morning’s shakedown.

Mikko Hirvonen holds fourth overnight, with Andreas Mikkelsen fifth and Latvala sixth. Outgoing nine-time world champion Sebastien Loeb is back at this event and sits seventh, 2.9sec off the lead, the Frenchman admitting that he needs time to get reacquainted with his DS3 WRC.