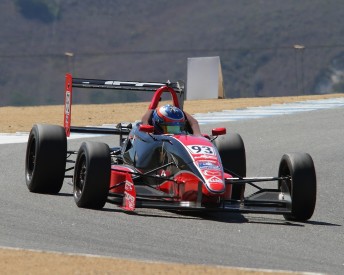 Highly regarded young Victorian Scott Andrews is preparing for a second start in the USF2000 championship at Houston’s Reliant Park circuit this weekend.

Andrews was a revelation at his debut in the wings and slicks class at the demanding Laguna Seca circuit early last month.

The young Torquay driver has prepared for the Houston assignment where the USF2000 series will run on the undercard to the penultimate IndyCar round, with a two-day test at the Mid-America Motorplex in Iowa.

“The Mid-America test was a chance to get more familiar with the car, especially how it reacts to set-up changes,” Andrews said.

“There’s so little track time at a race meeting that every extra lap helps.”

At Laguna Seca Andrews raised some eyebrows as to his potential by setting the fastest time in the second practice session.

He was showing the pace to claim a front-row start however that was thwarted by an error and a problem with the car before he converted a midfield starting position to a sixth and a ninth in the respective heats in the 24-car fields.

Andrews acknowledged the opportunity of racing with JDC Motorsports for the final two USF2000 Championship rounds.

“John Church and his team are amazing to work with – their experience has really flattened out my learning curve,” he said.

“We’re all striving for my first overseas race victory, and I’ll be giving it my best shot.”