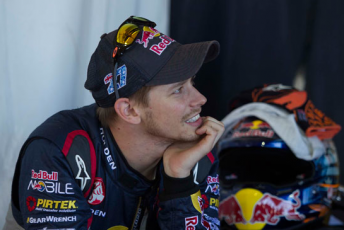 A year after retiring from motorcycle racing Stoner will return to the circuit for the special tribute lap where he had won the last six Australian Grands Prix consecutively.

“The 2012 Australian Motorcycle Grand Prix was a fairytale ending to my MotoGP career,” he said.

“It will be nice to take to the track with Mick and Wayne this year without the pressure of competing. I look forward to enjoying it and mixing with the fans that have supported me throughout my career.”

Stoner had been linked to a shock return to MotoGP after testing for Honda at Motegi, Japan, in early August however he has since confirmed he will be taking a sabbatical in 2014.

The 27-year-old has decided to walk away from full-time competition after one season in the V8 Supercars Dunlop Series.

Stoner has endured a demanding time behind the wheel of the Pirtek-backed Red Bull Holden.

He has just two rounds remaining at Bathurst from October 10-13, a week before the Phillip Island tribute, and at Sydney Olympic Park in December.