Johnson bounces back at the ‘Monster Mile’

Johnson bounces back at the ‘Monster Mile’ 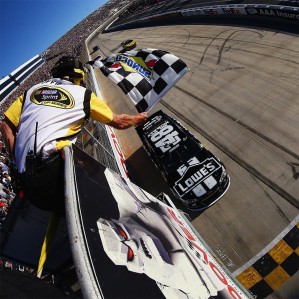 Five-time NASCAR Sprint Cup Champion Jimmie Johnson has hit back in this year’s title chase with victory in the AAA 400 at Dover International Speedway.

Johnson picked up his fifth victory of the season, his record eighth at the Monster Mile and the 65th of his career.

Johnson held-off a determined Dale Earnhardt Jr. who at the final round of pit stops took four tyres, while Johnson took right-side rubber only. Earnhardt Jr. climbed from fourth place on the re-start with 26 laps remaining to be on Johnson’s bumper by the back straight.

Johnson kept his cool as he did enough to beat home his Hendrick Motorsports team-mate.

The result put a dent in the points lead of Matt Kenseth, who crossed the line in seventh place. Johnson has closed to within eight points of Kenseth.

Kasey Kahne (13th place) suffered engine problems with 10 laps to go, the second week in a row he failed to finish on the lead lap. While Carl Edwards was the lowest-finishing Chase contender after he left the track to head to the garage as the race wound down because of a broken left-rear hub.

Last year’s champion and Dover winner Brad Keselowski was forced to the garage after a failure in the rear-end housing.